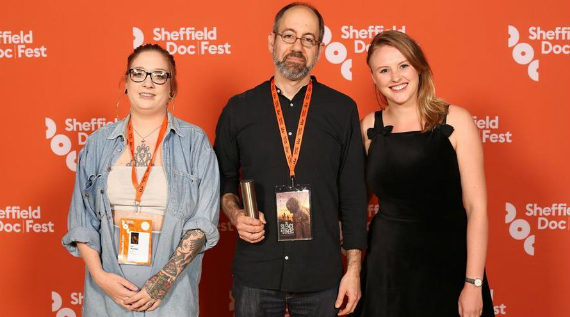 In festival news, the Sheffield Doc/Fest has wrapped and revealed its award winners: Almudena Carracedo and Robert Bahar’s THE SILENCE OF OTHERS won the Grand Jury Award, Ismael Caneppele’s MUSIC WHEN THE LIGHTS GO OUT took the Art Doc Award, Ed Perkins’s BLACK SHEEP was honored with the Short Doc Award, and Bing Liu won the New Talent Award for MINDING THE GAP. Writing at Little White Lies, Matt Turner singled out a trio of sports docs from the festival that left a lasting impression, as Realscreen’s Selina Chignall reported on the festival’s ‘Not Another Diversity Panel’ in which “Tom McDonald, head of commissioning, natural history & specialist factual at BBC, questioned if the issue of class made people so uncomfortable that it’s simply never discussed.”

Meanwhile at What (not) To Doc, Basil Tsiokos gave his usual thorough rundowns of new docs showing at AFI Docs and Frameline, as well as the Human Rights Watch Film Festival, which kicked off last Thursday. “One of the defining features of a good movie is its ability to whisk us away from our everyday lives. Several selections at the Human Rights Watch Film Festival, which opened this week, do just that. But the stories are far from fantasy — they’re invitations into the worlds of real, heroic people who persevere when all hope is lost,” wrote Sara Aridi in her feature on the fest for The New York Times. Exploring how the festival’s programming team how it selects its films, Eric Kohn spoke with artistic director John Biaggi for IndieWire, “At least half the programs in New York and London are about someone who has taken a great risk, pushing back against powerful forces in their society, and it serves to show that there are successes. Everything is not grim and dark. There are brave people out there doing great things and we need to spotlight them in these dark times.”

Christopher Dillon Quinn’s doc adaptation of Jonathan Safran Foer’s 2009 book EATING ANIMALS, narrated by Natalie Portman, was far and away the most written about doc hitting theaters this past week. In The New York Times, though Ben Kenigsberg had a hard time eating meat days later, he ultimately liked the film: “Christopher Quinn’s documentary makes a persuasive, far-ranging case against factory farming, which it skewers from philosophical, epidemiological and even economic perspectives.” Vanity Fair’s Rebecca Keegan notes the film’s focus, “Instead of emphasizing divisions, the filmmakers focused their documentary on the unsung heroes of livestock, people like Frank Reese, a fourth-generation farmer who raises heritage poultry with an emphasis on animal welfare and environmental stewardship, and veterinarian James Keen, a whistleblower who told The New York Times about animal mistreatment at a government laboratory.” In her warm three star review at RogerEbert.com, Christy Lemire explains, “There’s much to be alarmed about here, and Quinn bounces around between all of it in a way that’s almost too brisk and lean. Still, he makes the most of his time with powerful imagery and intimate, moving interviews.”

Other notable doc coverage this week includes Bill Desowitz‘s laudatory piece on WORMWOOD at IndieWire, a pair of conversations with WON’T YOU BE MY NEIGHBOR helmer Morgan Neville on The Close-Up and at The Ringer in conversation with Sean Fennessey, John Paul King‘s take on LOVE, CECIL in the Los Angeles Blade, Laura Davis‘s piece on Camila José Donoso’s CASA ROSHELL at MUBI’s Notebook, Gary Goldstein covering BELIEVER for the Los Angeles Times, and Christopher Llewellyn Reed’s reviews of LOVE, GILDA and DARK MONEY at Hammer To Nail. And let’s not forget the latest episode of Pure Nonfiction, featuring a conversation with Judd Apatow on his 4 hour HBO doc THE ZEN DIARIES OF GARRY SHANDLING.

Speaking of HBO, according to Kate Erbland at IndieWire, HBO Documentaries and the Independent Filmmaker Project (IFP) have announced the IFP/HBO New True Stories Funding Initiative, “A new fund that will ‘identify and nurture storytellers with fresh and compelling perspectives as they develop their work.’ This new initiative seeks to support and foster relationships with ‘new voices in a range of formats, cultivating adventurous and diverse new storytelling and storytellers.’ HBO will sponsor grants for multi-format, non-fiction storytellers with development funds at the earliest stage of bringing new work to a visual format.” Complete details about the IFP/HBO New True Stories Funding Initiative can be found here.

And while Vice listed their favorite 15 true crime docs currently streaming on Netflix, Adam Liptak of The New York Times reported that the Supreme Court will consider whether to hear Brendan Dassey (of MAKING A MURDERER)’s appeal, as Radley Balko of The Washington Post followed up before the hearing was ultimately delayed, reported Andy Thompson in USA Today.

I leave you this week with a lovely tribute and conversation between Film Comment’s Michael Sragow and film historian and documentary filmmaker Kevin Brownlow. As always, if you have any tips or recommendations for the Memo, please contact me via email here, or on Twitter, @Rectangular_Eye.