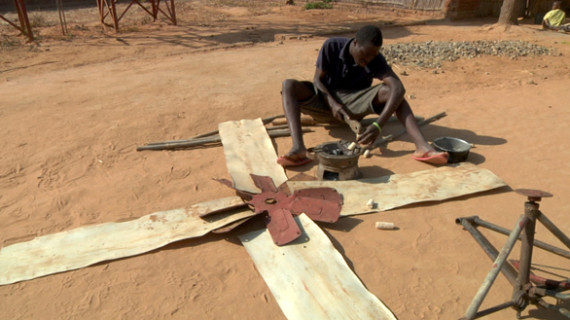 This week Stranger Than Fiction is hosting a pre-season special screening of S.R. Bindler’s film HANDS ON A HARD BODY at the IFC Center on Wednesday, March 20 at 8pm. For more information and to purchase tickets, please go here.

Hot Docs this week announced the projects that would participate in its forum; Adam Benzine of Realscreen had the details. Documentary forum The D-Word also hosted a discussion with Hot Docs staffers, but its only available to those with professional status on the site.

Adam Schartoff was exceptionally busy this week posting a number of filmmaker discussions online for his Filmwax radio show. Most recently Schartoff posted an interview with Omar Mullick and Bassam Tariq, directors of THESE BIRDS WALK. Schartoff also spoke with Judith Helfand, one of the founders of Chicken & Egg pictures and Maxim Pozdorovkin, director of PUSSY RIOT – A PUNK PRAYER, both of whom were in attendance at True/False.

Over at Indiewire, Anne Thompson interviewed Alex Gibney about his new film WE STEAL SECRETS: THE STORY OF WIKILEAKS. The Economist’s Prospero blog spoke with director Ken Loach about his latest work, THE SPIRIT OF ‘45, among other topics. In its latest post for Filmmaker Magazine, the MIT Open Documentary Lab spoke with Elaine McMillion about her interactive documentary HOLLOW. Writing for the Documentary Channel blog, Christopher Campbell talked to producer Gary Nicholson about his project THE TYPEWRITER (IN THE 21ST CENTURY).

In a piece for Indiewire, writer Matt Brennan asked what viewers should expect from a documentary on number of different levels.

The Independent Lens blog had a somewhat related post from Rebecca Huval outlining all of the ways THE INVISIBLE WAR, Kirby Dick’s expose on sexual assault in the military, has changed the discussion about rape in the armed forces.

At the SundanceNow site, critics Nick Pinkerton and Nicolas Rapold had a freewheeling discussion on this year’s True/False Film Fest.

Both Oakley Anderson-Moore of No Film School and Billy Brennan of Filmmaker Magazine this week pointed to an IFP Masterclass from Louise Rosen on how to get your documentary funded.

In distro news this week, Phil Gallo of Billboard Greg Camlier’s MUSCLE SHOALS was picked up by Magnolia Pictures, which secured U.S. rights. Adam Benzine of Realscreen reported that Oscar-winning short INOCENTE had been acquired by Autentic, while colleague Kevin Ritchie had the news that international rights for Richard Rowley’s DIRTY WARS had been snagged by HanWay Films.

Adam Benzine also reported that MUSCLE SHOALS, along with several other docs, were set to screen at Sundance London in April.

This week Anthony Kaufman used his Docutopia post to examine the documentary output of the ever-growing Vice media empire.

Oh his What (Not) to Doc blog, Basil Tsiokos provided a preview of the Thessaloniki Documentary Festival, set to take place in Greece March 15-24.

Writing for Filmmaker Magazine, Stephen Garrett has some great advice for those with the unenviable task of cutting a trailer for their film.

Richard Verrier of the Los Angeles Times this week profiled Cinedigm, the organization behind Docurama, and its efforts to switch theaters over to digital projection.

At the POV blog, Tom Roston wrote about some of the complications that arise from festivals, such as Tribeca, that are increasingly reliant on corporate sponsors.

Over at About.com, Jennifer Merin had an overview of some of the offerings at this year’s Full Frame Film Festival.

Back at the Documentary Channel blog, Christopher Campbell had some recent documentary trailers he thought were worth taking a look at, including SXSW audience award winner THE SHORT GAME from director Josh Greenbaum.

The New York Times was the subject of some news this week, when it announced that it had partnered with Canada’s National Film Board (NFB) for the interactive doc series A SHORT HISTORY OF THE HIGHRISE. Kelly Anderson at Realscreen had the details.

David Tamés this week shared the second part of his “Sound for Docs” posts at his Kino-Eye site, a great read for anyone struggling with sound issues.

Writing for the DocGeeks blog, Ben Unwin had a review of Ken Loach’s new film SPIRIT OF ‘45. Also at DocGeeks, Alexandra Zeelvalkink had an overview of the Human Rights Watch festival taking place in London.

And finally Christopher Campbell penned a post on those notable films hitting the big screen this week at the Documentary Channel blog.

That’s it for this week, but please send tips and recommendations for the Memo via e-mail here, or by Twitter to @GuerrillaFace. Thanks, and have a great week everyone.