A NIGHT WITH ROSS McELWEE 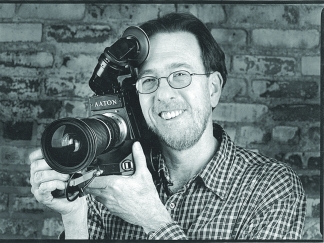 SOLD OUT! If you missed getting a ticket, we invite you to join us for the post-show gathering, after 10 pm, at the Alibi Lounge 116 MacDougal Street.

CHARLEEN (1977) – 40 min- Anyone who’s seen SHERMAN’S MARCH or TIME INDEFINITE will never forget the character of Charleen Swansea, the friend of Ross McElwee who dispenses advice about relationships and everything else in rapid fire delivery. She was also the subject of McElwee’s first film. He write: “My sound recordist, Michel Negroponte, and I filmed nearly daily for a month in Charleen’s life. &”160;Our first day of filming yielded the opening scene of the film, in which Charleen confronts a classroom of &”160;sullen students – “problem kids” – with the intention of trying to get them to write poetry. &”160;Out in the hallway, before we began shooting, Charleen told me that she could not slow down for me, and that I simply had to keep up with whatever she did and whatever happened. &”160;This became the modus operandi for the entire shoot…. During the course of the film, she experiences times of both closeness and frustration with her boyfriend and with her son and daughter. &”160;She delivers a talk at her mother’s Thursday morning Bible class and garden party. &”160;She shares an off color joke with a friend, a woman Charleen claims is the only person who understands her. &”160;We filmed the poetry concert, and I assumed the filming was over, but the next night, Charleen called me and asked me to come over because she had a few things to tell me. &”160;Her life had suddenly, unexpectedly &”160;fallen apart, and she was trying to figure out how to put it back together again.”

BACKYARD (1984) – 40 min – McElwee writes: “I was initially interested in two documentary possibilities, and began filming them as separate projects. &”160;The first was to have been about Clyde Cathy, a black bee-keeper who worked for my father as a yardman. &”160;I knew that Clyde had some mystical notions about bees, and I was interested in filming him as he worked around our family’s house, and also as he worked with his bee hives. &”160;&”160;The second film was to have been about the relationship between my father and my brother, Tom, who was preparing to go off to New Orleans for his first year of medical school. &”160;I thought this might be a long-term project, in which I would film Tom off and on over the four years it would take him to get his medical degree. &”160;I assumed he would eventually come back to Charlotte and practice with my father, and that this would provide wonderful closure. &”160;But my two films wanted to meld, and I could not keep them apart. &”160;What seemed to hold them together, thematically, was the location – my family’s backyard – and I pretty much restricted my filming to the yard and a few other locations in the neighborhood.”