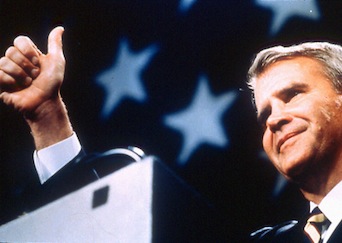 SUMMER SPECIAL Hailed by the Washington Post as “the best American documentary since Hoop Dreams and one of a small handful of essential films about politics in this country,” A Perfect Candidate explores our national obsession with winning, and the impact of that obsession on the nation’s well-being. Casting Oliver North as an unlikely underdog in American politics, acclaimed filmmakers R.J. Cutler (The War Room, The September Issue) and David Van Taylor (Dream Deceivers, With God On Our Side) weave a timely parable about contemporary leadership and campaign culture in a cynical age, where issues take a back seat to the machinations of political spin doctors and voter interests are distorted in a media hall of mirrors.

Cutler and Van Taylor spent 11 months following the race on both sides. They gained unprecedented access to the candidates, their handlers, the press and voters, which enabled them to explore the unexpected and very human dimensions behind many of the campaign’s major players. “We weren’t there to make Ollie look good or bad. We weren’t there to make Chuck look good or bad,” explains Cutler. “We wanted to see what was going on and we wanted as clearly as possible to tell the story of what we saw. One of the big reasons why the people in this film gave us the access that they did was because of a need that they had, a desire to have this film made,” he added.