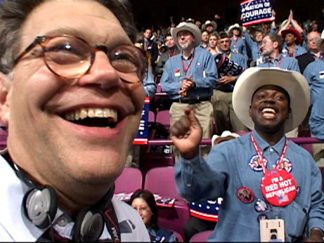 The makers of THE WAR ROOM turn their cameras on yet another burgeoning political career. Filmmakers, Nick Doob, Chris Hegedus and D A Pennebaker followed former Saturday Night Live comedian Al Franken during the election year of 2004 as he joined Air America radio and campaigned for John Kerry. Along the way, the filmmakers captured a fascinating transformation as Franken began to contemplate his own political career that resulted in his hotly contested 2008 run for Senate in Minnesota.

“It~s like watching the tiger grow spots,” says Pennebaker. “It all happens right there in front of you.” Early in their process, they trailed Franken to a Playboy magazine shoot for an article about his latest book. “Al was dressed as Moses with the ten commandments tablet and God was giving orders.” Hegedus recalled. “We realized right away that hanging out with Al was going to be an adventure.”

On the way to the shoot, sitting in the backseat of the taxi, it~s immediately apparent that Franken~s brain isn~t wired like other people~s. He tries out jokes on anyone in proximity”~all the time. They went from the Playboy shoot to the second Democratic debate for the presidential hopefuls. All of the candidates shuffled over to say hello to Franken, the unlikely insider, who seemed to have access to everyone. Later that night, Franken gave the opening address at a DNC fund-raising dinner. He was irreverent, hilarious, and incredibly effective.

In the two years of filming, we watch a personal drama unfold as Franken moves from his seat in the sidelines to become a contender in the political ring.


Get Tickets
Q&A with directors Chris Hegedus and Nick Doob