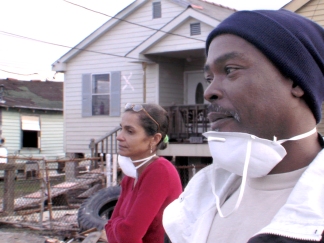 SPECIAL: FIRST HUNDRED TICKET HOLDERS TO ARRIVE AT THE THEATER STARTING AT 7 PM WILL RECEIVE A BOXED DVD SET OF “THE KATRINA EXPERIENCE” – SEVEN FILMS INCLUDING “NEW ORLEANS MUSIC IN EXILE” AND MORE. COURTESY OF INDIEPIX.

Since its debut at the 2007 New York Film Festival, AXE IN THE ATTIC has been stirring audience debate for its heartfelt depictions of Hurricane Katrina evacuees and the questions it raises about the relationship between filmmakers and subjects.

Co-director Ed Pincus was a pioneer of documentary film, starting out in the 1960s with works like BLACK NATCHEZ. He made ground-breaking personal films such as DIARIES 1971-1976 and was an influential teacher in the 1970s, mentoring acclaimed directors such as Ross McElwee. Pincus’ book THE FILMMAKER’S HANDBOOK is considered the Bible of the field. AXE IN THE ATTIC marks his return after a long break from directing. We’re especially pleased to welcome him for a rare New York appearance, joining Lucia Small who won notoreity for her personal doc MY FATHER, THE GENIUS.

Here’s a description of AXE IN THE ATTIC from the film’s web site:

What does it mean to be exiled in your own country? Drawn together by outrage, documentary filmmakers Ed Pincus and Lucia Small embark on a sixty-day road trip from New England to Louisiana, and ultimately into the Katrina devastation zone to meet evacuees who have lost their homes. They make the uneasy choice of integrating themselves into the story, “because when you’re two white northerners heading South, remaining behind the camera just doesn’t feel like an option.”

When the film opens, it is six months since Katrina hit New Orleans and the levees breached causing the largest internal migration in American history. We first see the eerie beauty and horror of the shattered landscape, draped in heavy fog and emptied of its residents.

The story of an American Diaspora unfolds – the displaced struggling with loss of home, family, and culture. Emotions range from deep pain to surprising humor, as filmmakers and subjects tackle questions of race, class, and our government’s failure to protect its own.