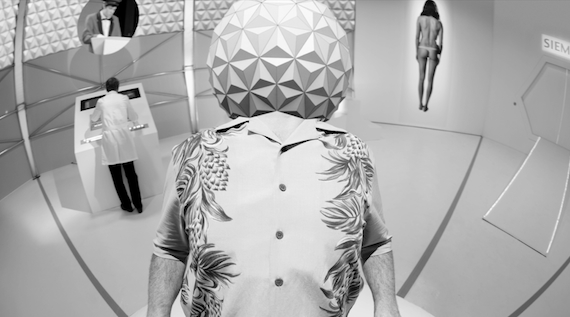 SOLD OUT. Try the wait line in person at the IFC Center. Any last-minute tickets will be sold on a first come, first served basis.

Somewhat of a departure for STF, Escape From Tomorrow isn’t a documentary, but it definitely fulfills the label of “stranger” than most other films you’ll see this season – or ever. Filmed surreptitiously inside of Disney World, the film applies the techniques of documentary to create a purely fictional anti-corporate satire with elements of science fiction and horror. Imagine if David Lynch had directed National Lampoon’s Vacation. Premiering at the 2013 Sundance Film Festival, Escape From Tomorrow was hailed by critics as “sneakily subversive” (Variety) and “wholly original” (Indiewire) but many fest goers predicted it would never be officially released due to legal entanglements. The team who distributed Exit Through the Gift Shop stepped up to the challenge and will release Escape in theaters this fall.

Beyond the issue of whether or not it has the legal right to exist, however, Escape from Tomorrow displays a fascinating ingenuity in its appropriation of the Disney brand. Seeming everyman Jim White (Roy Abramson) awakens at the start of the story to learn that he has lost his job for inexplicable reasons, the first of many hazy events that immediately convey a Kafkaesque feel.

Rather than share the news with his nagging wife (Elena Schuber) or feisty young children (Katelynn Rodriguez and Jack Dalton), he keeps it secret as they set about a chaotic day in the park. Familiar Disney amusements zip by: The family rides the monorail, photographs the Magic Kingdom, rides around in teacups and passes by hordes of familiar characters from the Disney toy chest. For Jim, however, the excursion fails to provide an exit strategy from his woes and instead puts his sanity at stake. In short order, he starts suffering from blackouts and bizarre visions of devious behavior, including villainous versions of his family and monstrous animatronics come to life.