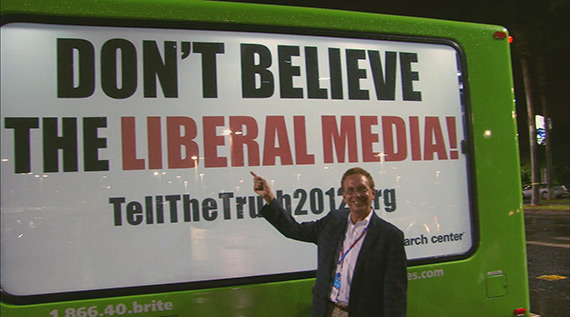 Hot Type: 150 Years of The Nation is a vivid, inside look at America’s oldest continuously published weekly magazine. Shot over three years in intimate, cinema verite style, the film captures the day-to-day pressures and challenges of publishing the progressive magazine as it follows reporters out into the field, the editors who shape their work, and the editor-in chief who tries to keep all of the plates spinning.
Writers are the heart and soul of the magazine, and the film follows them extensively. Sasha Abramsky travels to West Texas to report on the years-long drought that has gripped the region and the devastating economic impact on farmers and residents. John Nichols unpacks what’s going on behind the effort to recall Wisconsin governor Scott Walker. Amy Wilentz visits the “temporary” tent camps of Haiti, three years after the earthquake, to shed light on the dire conditions and lackluster international response. And Dani McClain reports on the Moral Monday movement in North Carolina, and its dynamic leader Rev. William Barber, as they push back against an extreme right-wing takeover of the state legislature.
In all of the current-day reported stories, The Nation’s incredible trove of archival articles – and roster of writers – acts as an historical touchstone and illuminates how the past continuously ripples through and shapes current events.

At a fascinating moment in American history – politically, socially and culturally – the media landscape is changing at breathtaking speed. The film charts the journey of The Nation – and the nation – evolving into the future, as it is guided by its remarkable past.


Get Tickets Q&A with director Barbara Kopple; editor and publisher of The Nation, Katrina vanden Heuvel; and journalists Max Rivlin-Nadler and Zoe Schlanger