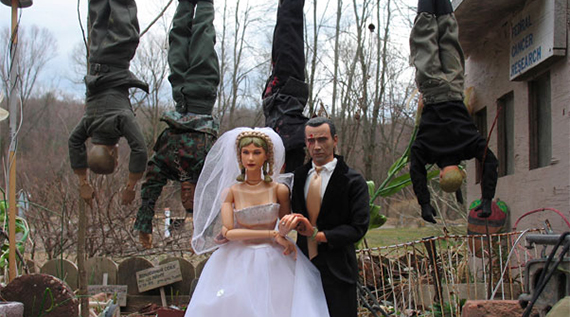 After a few years, Mark started documenting his miniature dramas with his camera. Through Mark’s lens, these were no longer dolls; they were living, breathing characters in an epic WWII story full of violence, jealousy, longing and revenge. And he (or rather his alter ego, Captain Hogancamp) was the hero.
When Mark’s stunningly realistic photos are discovered and published in an art magazine, his homemade therapy suddenly becomes “art,” forcing Mark to make a choice between the safety of his fictional town and the real world he’s avoided since his attack.

Shot over the course of four years, Jeff Malmberg’s documentary intertwines the dual realities of Mark Hogancamp to tell the whole story of Marwencol; a surprising tale of love, secrets, pain, and adventure.

Following the screening, film subject Mark Hogancamp and co-author/film producer Chris Shellen will be doing a post-screening Q&A and signing of the new book “Welcome to Marwencol.”