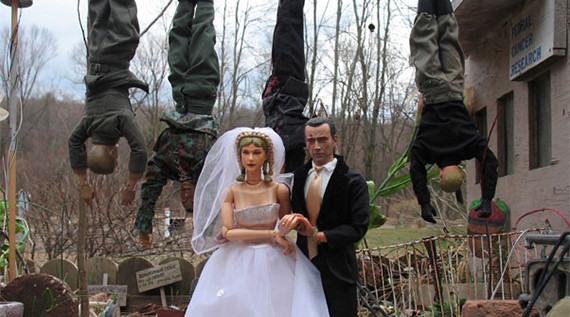 Directed by Jeff Malmberg and produced by Chris Shellen, MARWENCOL, the 2010 winner of the Grand Jury Prize at SXSW, is a doorway into the imagination of Mark Hogancamp, a man whose memory was kicked out of him in a vicious attack that left him in a coma. In true Stranger Than Fiction fashion, MARWENCOL is a departure from standard societal expectations of what therapy looks like. Hogancamp’s construction of a miniature and elaborate World War II town and the stories held within were about reconstructing the thing most important to his sense of self: his imagination.

At 38, after suffering severe brain injuries and physical and emotional trauma, Hogancamp had everything to learn over. He didn’t remember that he was once married, and looked and asked for clues about who he was before being attacked. What he found was that vitriol had burned through the pages of his journals, a toxic wildfire of words and illustrations. In the film he recalls asking others what he was like: “Was I mean?”“No you weren’t mean, you were just drunk.” “Did I hurt anyone?” “Just yourself.”

Mark eventually found himself broke and out of therapy sessions. To restore his hand eye coordination and create a safe space for himself, his world populated with tiny dolls had larger than life personalities, representative of his alter ego and the family, friends, and community members he wanted in his town. “Everyone wishes they had a double that they wish could do the things they could never do,” he says in his introduction of his doll self. The film, like the construction of the town, is told through Mark’s eyes, a scaffolding of his identity as it is recreated, an identity he is vulnerably honest about and fiercely protective and proud of. “If I tell people who I am than I’m being authentic. What they do with it is on them, I’m being true to myself and I’m not accountable for their feelings.”

His town is a theater encompassing stories that span a spectrum of love, longing, rage, violence, redemption and rescue. The stories both satisfy and express a yearning for connection, however his trepidation of the world outside the one he has created worries him, as his biggest fear is that he “doesn’t want to get hurt mentally, emotionally, or physically ever again.” When Esopus, a magazine made for artists took notice of his work, leading to an exhibit in Greenwich Village, Mark said the “voice in his head that didn’t get broke tells him to do the show and give it a go.” Though he doesn’t consider himself an artist, he used the art to regain something, and it’s the engagement and involvement with his craft that is his entry point in finding his way back to himself. Mark did what worked for him, and MARWENCOL demonstrates that listening to our internal barometer can bring our lives back into focus.

In the post-screening Q&A, the audience got caught up with updates from Mark since the original release of the film, highlights that include a new book, “Welcome to Marwencol.” He doesn’t see the book as art, he sees it as medication, and his story has inspired others with brain injuries. “When I first saw the book, my story– I cried so hard–for me the book was the first time I saw my stuff in an actual story where I’m looking at it as an outside person. When those guys beat me up and I was in a coma for nine days and I woke up, I felt like I went to another parallel earth–and then after everything was taken away coming up with a way to heal myself meant so much for me in getting my imagination back. Those guys took a lot of things away from me but now I’m creating new memories and new stories, stories where I win, because I’m not going to let those five guys win, never.” 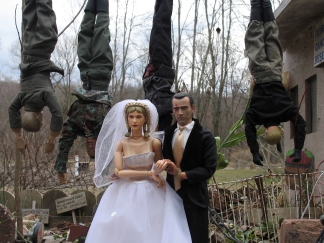