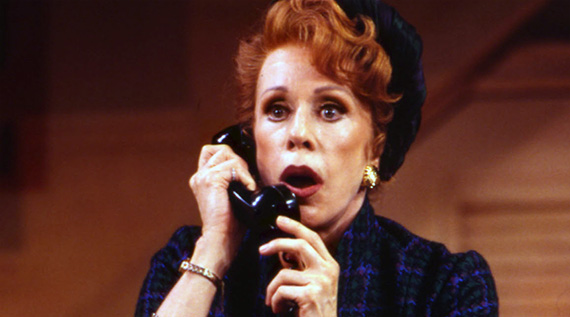 “Like viewing the remains of the Titanic. A harrowing and fascinating exploration of a flop, and I’m surprised I wasn’t in it. Instead of being nominated, Carol Burnett should be canonized.” — Nathan Lane

Chris Hegedus and D A Pennebaker bring their fly-on-the-wall camera backstage to take a fresh, eye-opening, no-holds-barred look at the big bang adventure of producing a Broadway hit. The Broadway show in question is “Moon Over Buffalo,” starring Carol Burnett and Philip Bosco, a comedy about a low-rent Lunt and Fontaine, hell-bent upon recharging their careers.

Cited by The New York Times as “the best documentary of the year,” the film features hilarious turns by its leading actors—and even funnier behind-the-scenes sequences, as everyone mounting this high-risk Broadway production goes into nail-biting overdrive.

The play’s director, Tom Moore, and co-producers Rocco Landesman and Elizabeth Williams, help playwright Ken Ludwig through endless rewrites and finally to opening night, which Ludwig dubs “a bar mitzvah from hell.” Only those few who have been lucky enough to glimpse backstage through the curtain have seen Broadway quite like this.