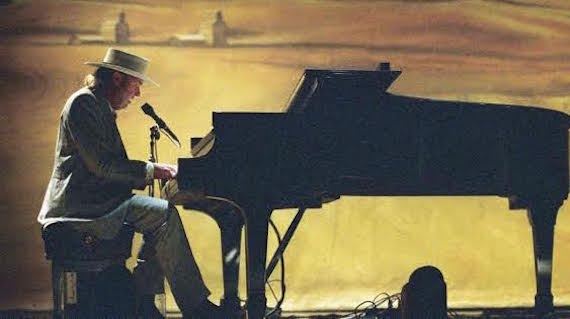 STF’s Fall Season is dedicated to a retrospective of Jonathan Demme’s documentaries. Demme attends STF to present one of his three concert film collaborations with Neil Young. Here’s an excerpt from Manohla Dargis’ 2006 review in The New York Times:

WHEN the curtain opens, Neil Young is standing onstage, his face full of years. Dressed in a gray western suit, with a plainsman’s hat and a well-used acoustic guitar, he looks like an old-time cowboy crooner, but somehow scruffier. The hair curling over his collar seems greasy and the way he ducks his head you might think he hadn’t spent much time indoors; he probably needs to knock the dust off his boots before he enters the parlor. It’s a fanciful fiction, this gent with the hat, the suit and the aw-shucks reserve, and part of the beautiful story Jonathan Demme tells in his concert film “Neil Young: Heart of Gold.”

Mr. Demme shot the film over the course of two concerts recorded on Aug. 18 and 19 in Nashville’s storied Ryman Auditorium, original home of the Grand Ole Opry. The first half of the film includes 9 of the 10 songs from Mr. Young’s most recent album, “Prairie Wind” (Mr. Demme saved one song for the DVD); the second features 10 titles from his songbook, a number of which were first recorded in Nashville. Although this part of the film — this set, really — begins with “I Am a Child,” which he recorded with his former band Buffalo Springfield, many of the other titles in this section — “Old Man,” “Old King” and “The Old Laughing Lady” — suggest that Mr. Young, who turned 60 in November, is in a ruminative state of mind.

The film provides no real back story about the production, but in interviews Mr. Young has said that the idea for it arose out of a phone conversation he had with Mr. Demme. The director, who made the Talking Heads concert film “Stop Making Sense,” explained that he had a year off (nice work if you can get it) and asked Mr. Young what he was up to. As it happens, the musician had just finished “Prairie Wind,” which he had begun recording right after discovering that he had to undergo surgery for a brain aneurysm. He cut some of the songs in Nashville, had the surgery (twice) and then finished the recording.


Get Tickets Presented by Jonathan Demme