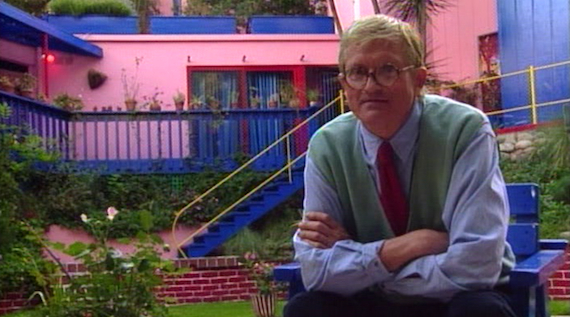 Director Morgan Neville came to prominence this year with his beloved documentary 20 Feet From Stardom. Many viewers don’t realize he has a long track record of critically acclaimed documentaries on music and culture. STF shines a spotlight on his career, presenting his first feature-length film, made in collaboration with Harry Pallenberg, Shotgun Freeway, a filmic essay on Los Angeles that combines archival footage with an eclectic list of interview subjects from Joan Didion to David Hockney.

Reviewing the film for the Los Angeles Times, critic Kevin Thomas called it “one of the most ambitious documentaries on Los Angeles ever attempted… Among the best of the documentary’s witnesses is crime fiction writer James Ellroy, who, when not showing off, observes that some people come to Los Angeles who “want to live some Utopian fantasy” and are “driven crazy” when they fail. A droll Buck Henry, who grew up in the motion picture industry, offers astute takes on Hollywood, and veteran journalist Nick Beck, who grew up in Hollywood, laments its decline. Realtor Elaine Young, conducts a breezy, lighthearted tour of Beverly Hills, and architectural historian Margaret Crawford takes us on a revealing ride from one end of Van Nuys Boulevard to the other.”