THE BURGER AND THE KING: THE LIFE AND CUISINE OF ELVIS PRESLEY 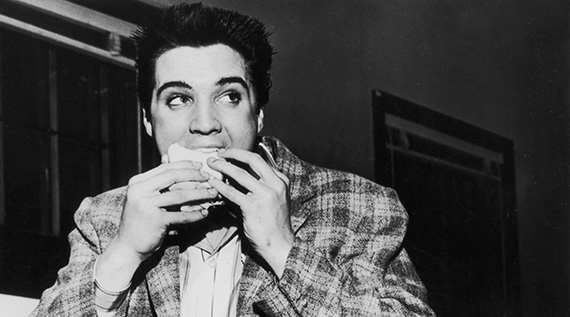 Director James Marsh has a distinguised documentary career, making several films for the BBC that are rarely screened in the U.S. A few of his titles have achieved cult status, including WISCONSIN DEATH TRIP and HIGHWAY 61 REVISITED (highly praised by critic Greil Marcus among others). His latest film MAN ON WIRE, about aerialist Philippe Petit’s famous tightrope walk between the World Trade Center buildings, has all the makings of a hit. It’s already garnered Audience Awards at both Sundance and Full Frame and will play at the Tribeca Film Festival before being released by Magnolia in summer 2008.

STF is pleased to bring to light this Marsh title from 1996, based on David Adler’s book The Life and Cuisine of Elvis Presley, in which he explores America by following Elvis’ appetite. The film travels from Memphis to Las Vegas, documenting dishes (mostly fried) from squirrel to peanut butter and banana sandwiches, complete with recipes. Along the way, we meet a range of fascinating characters, from Elvis’ cook who served his last meal of cheeseburgers to his eating companion who was known to join him on chartered flights just to satisfy a craving.

Mr. Marsh received his first directorial assignment in 1989, when he was 25. Arena, says Mr. Marsh — an Englishman now living in New York — was putting on ”themed evenings, four or five hours a night on a single subject.” One was ”Food night,” and for it Mr. Marsh conceived a 15-minute segment on the last meals of condemned prisoners. ”I wanted to know what the ritual meant in a bureaucratic system of execution,” he says, recalling that in the British tradition a prisoner’s last meal might also have involved a last drunk, complete with prostitutes. Because capital punishment had been all but abolished in the United Kingdom since the 1960’s, Mr. Marsh set off for a two-day shoot on Death Row in Louisiana. ”I wanted to expose the process in one detail,” he says. He ended up focusing on a single prisoner, a man ”outraged by the crazy idea of hospitality at the end of his life.”

There is probably a more direct line from this first project to Mr. Marsh’s ”Wisconsin Death Trip” than to another food piece by him, ”The Burger and the King.” In this graceful account of ”The Life and Cuisine of Elvis Presley,” the fine David Adler book on which the film is based, cooks from throughout Presley’s life — from his high school cafeteria, the Army, Graceland — present their dishes proudly and so lovingly that by the end one may want nothing more than to copy down the recipe for fried banana and peanut-butter sandwiches and make one.