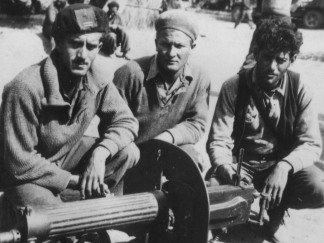 This year marks the 25th anniversary since the release of THE GOOD FIGHT: THE ABRAHAM LINCOLN BRIGADE IN THE SPANISH CIVIL WAR. A New York Times critics’ pick in 1984, here is Vincent Canby’s review:

”The Good Fight” was produced and directed by Noel Buckner, Mary Dore and Sam Sills. They’ve done an excellent job, not only in organizing their material but in eliciting that material in on-screen interviews, which are supported by newsreel footage and even in a clip from ”Blockade,” a not-great movie that is notable chiefly as the only major Hollywood film to deal with the Spanish war.

Not always remembered now is that the Spanish Civil War, in which Hitler and Mussolini supported the rebel forces of Generalissimo Francisco Franco, was not a popular cause in this country. The United States, along with Britain, France and the other Allied powers, vowed not to intervene on behalf of the elected Republican Government of Spain. Only the Soviet Union and Mexico offered support.

What makes the testimony in ”The Good Fight” so effective is the veterans’ shared conviction, more than 40 years after the fact, that the war against Franco was, indeed, the good fight, though at that time it also seemed a lost one. Americans have always been keen on ”good fights,” but the members of the Lincoln Brigade, unlike the young men who formed the Lafayette Escadrille in World War I, were motivated more by politics than by any sense of romance and adventure.

The members of the Lincoln Brigade, many of whom had been active in leftist political groups, were not rich kids out on a lark to defend the status quo. They were poor as well as rich, women as well as men, black as well as white – all convinced that something important in the evolution of the world’s political consciousness was being destroyed in Spain. Among other things, as one man points out in ”The Good Fight,” the Lincoln Brigade was the first truly integrated American fighting force. And, as anyone who was in World War II remembers, racial integration in the United States armed services wasn’t even complete by the time that war ended.

Among the film’s witnesses are Bill Bailey, the politically active longshoreman and seaman whose vivid testimony can also be heard (and seen) in ”Seeing Red”; Dave Thompson, an upper-class Californian and nephew of Stephen Vincent Benet, and Brooklyn-born Milt Wolff who, at 23, became a commander of the Lincoln Brigade, many of whose members were still in their teens. By the time the Lincoln Brigade was withdrawn from Spain, approximately half of the 3,200 volunteers were dead.

Very stirring too is the testimony of the women: pint-size Evelyn Hutchins, who drove an ambulance in Spain (and who has died since filming her interview), and Salaria Kea O’Reilly and Ruth Davidow, who were nurses. Ed Balchowsky, a pianist and folk singer who lost his right arm in Spain, recalls the songs of the war, some with lyrics designed to affront self- important visitors to the Loyalist front, including the American Communist Party’s Earl Browder.

Studs Terkel speaks the sound track narration. Colleen Dewhurst recites an English translation of the speech given by Dolores Ibarruri (the formidable Spanish Communist known as La Pasionara) to the members of the Lincoln Brigade the day they sailed home from Barcelona.

”The Good Fight” is both sorrowful and inspiring.

STF celebrates the 25th anniversary of THE GOOD FIGHT