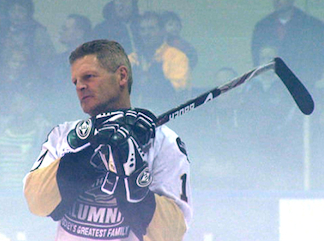 Following the world premiere of THE LAST GLADIATORS at the Toronto International Film Festival this month, director Alex Gibney took away thoughts from watching the film with an audience and decided to tweak parts of the edit. In this special STF presentation, he’ll screen the work-in-progress to gain further insights and participate in a post-show discussion about the making of the film.

Chris “Knuckles” Nilan can chart his hockey career by his scars. He earned those stripes as one the NHL’s fiercest enforcers, throwing punches to defend his teammates. While playing for the Montreal Canadiens in the mid-eighties, his fights racked up penalty minutes but received roaring approval from fans and helped win the Stanley Cup. When injuries forced Nilan to retire in 1992, he faced a new battle: how do you stop being a gladiator and re-enter normal society?

Director Alex Gibney, who played hockey as a youth, comes to Nilan’s story with an admiration for the game and its masters. While interviewing NHL greats, Gibney found himself drawn to Nilan, and uncovered a sensitive side behind the tough exterior. The Last Gladiators succeeds at connecting to both hockey fans and outsiders by taking a nuanced look at Nilan’s career and the legacy of enforcers.

In the film, Nilan recounts the ups and downs of his life with poignancy. As an Irish kid in West Roxbury, Massachusetts, he learned the law of streets: never back down, never stay down. He idolized the finesse of Boston Bruins’ star Bobby Orr. But he knew that his only way into the big leagues was with his fists. Nilan started as an enforcer but soon learned to be a complete player. Yet, his reputation as a fighter made him a target for kids who wanted to make names for themselves.

His legendary fights took their toll, sending him to the hospital for twenty six surgeries. Leaving the league in his mid-thirties, he had difficulty adjusting to desk jobs and gave in to addictions. Now he takes one day at a time and looks back on his glory days with a mixture of joy and regret.

Gibney has a knack for exploring flawed characters, as he displayed in Client 9: The Rise and Fall of Eliot Spitzer. Though rooted in hockey, The Last Gladiators raises wider questions about the bloodlust in our culture and how we treat our warriors when the battle is over.