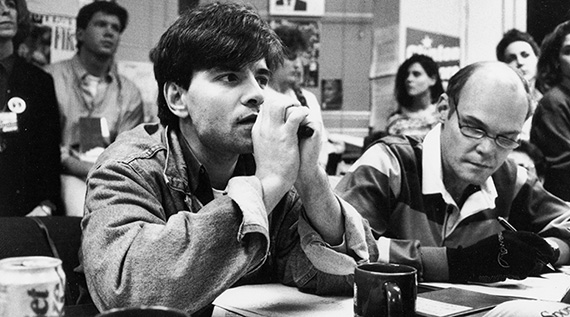 “The War Room” was the name for Bill Clinton’s campaign center in Little Rock, Ark. Though the press wasn’t usually permitted inside this small warren of chaos, filmmakers D A Pennebaker and Chris Hegedus, managed to secure partial access and shot nearly 35 hours of footage there. At the center of The War Room are the two men who guided Clinton’s ship from the beginning: James Carville, the fiery, charismatic, expletive-spewing Cajun who manages the campaign with a mixture of Southern charm and unrelenting passion; and George Stephanopoulos, the brilliant, handsome Rhodes Scholar who, as communications director, calmly but surely mobilizes his staff to take the presidency.

Hegedus and Pennebaker’s camera follow these two masterminds as they organize and execute strategies for such events as the Democratic National Convention, the debates with George Bush and H. Ross Perot, and the final, nail-biting days leading up to the election itself, when it seemed less and less certain whom the voters would choose. The War Room is a compelling and enlightening adventure story about two remarkable men, and about the monumental effort, determination and chutzpah that is required to conduct and win a political campaign in the modern age.

“Is any stone left unturned in a modern Presidential campaign? When every last whistle-stop and handshake is thoroughly documented, can there be anything more for a filmmaker to find? When D. A. Pennebaker and Chris Hegedus set out to chronicle the Clinton campaign, they were taking on a seemingly redundant task. And yet The War Room, their glimpse of maneuvers by Clinton strategists, finds new facets of the story and manages to coax cliffhanging suspense out of a fait accompli.