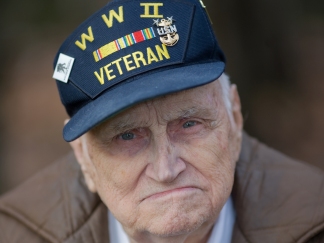 This screening is SOLD OUT.

Winner of the Audience Award at the Full Frame Film Festival, THE WAY WE GET BY takes us inside a small airport in Bangor, Maine, where nearly one million U.S. soldiers have been sent off and welcomed home from war. A group of senior citizens play their part as citizens by greeting soldiers as they depart and arrive. The film shows how these handshakes can change a person’s life.

THE WAY WE GET BY follows three seniors, Bill Knight, Joan Gaudet, and Jerry Mundy as they battle with the critical issues common to the nation’s ever-growing aging population. Through their candid and moving stories, viewers are provided with a truthful look at what millions of Americans are facing across the country.

One theme explored throughout the film is the emotional losses that come with growing old. Whether it’s the loss of a spouse or a child, the loss of identity after retirement, or the loss of youth, each comes with life-altering consequences. We take a raw and intimate look at our three character’s lives outside the airport, revealing their own personal losses that led them to troop greeting. On the surface, it looks like the endless trips to the airport provide an escape for them. But as the story progresses, we learn the airport is where they find the inspiration to confront their issues at home and the strength to overcome them.

Co-presented by the Camden International Film Festival and POV.

Visit the film’s website to learn about future screenings: www.thewaywegetbymovie.com

THE WAY WE GET BY opens at IFC Center this Friday