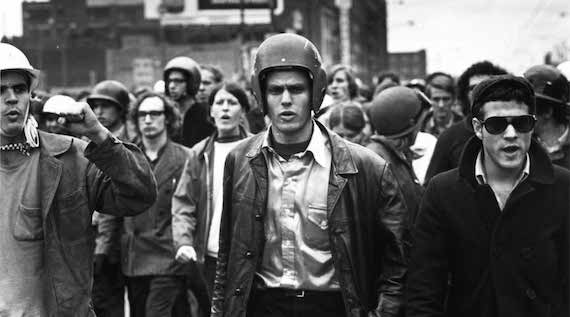 The Oscar-nominated award-winning film interweaves extensive archival material with modern-day interviews to explore the incredible story of “The Weather Underground.” As former members reflect candidly about the idealistic passion that drove them to “bring the war home,” they paint a compelling portrait of troubled and revolutionary times, with unexpected and often striking connections to the current world situation.

A New York Times Critic’s pick when released, here is the NYT review:

”When you feel you have right on your side, you can do some pretty horrific things.” So says Brian Flanagan in ”The Weather Underground,” an intelligently assembled documentary that opens today at Film Forum in Manhattan. Mr. Flanagan is a former member of the Weathermen, the revolutionary antiwar group that began in 1969, and his remark suggests both the motivation and the modus operandi of the organization.

”Underground” tells the story of a splinter group of young people from the Students for a Democratic Society, or S.D.S. And here the directors Sam Green and Bill Siegel have unearthed a great story that had fallen into oblivion: the young, violent and glamorous antiestablishment militants of the 1960’s.

The film notes that the group took its name from a Bob Dylan song with the lyric ”You don’t need a weatherman to know which way the wind blows.” The song, by the way, is ”Subterranean Homesick Blues”; its title describes the feelings of some of the Weathermen, who were forced to live underground for much longer than they had expected.

This terrifically smart and solid piece of filmmaking lets the former Weathermen, now in their 50’s and older, speak into the camera and reveal a bit of their personal histories as well as what the peace movement meant to them. The narration is introduced about 10 minutes into the film. At first we’re introduced to former activists as they looked when ”Underground” was filmed; then we’re shown more youthful images.

The stars of ”Underground” were, as Weathermen, determined to overthrow the United States government, believing it had criminally waged war in Vietnam and persecuted groups like the Black Panthers. Voluble and charismatic, young, white and articulate, they spent a lot of time in the news media spotlight; figures like Bernadette Dohrn, Bill Ayers, Mark Rudd, Naomi Jaffe and Mr. Flanagan were clearly sexy criminals. Todd Gitlin, who was an S.D.S. president and is now an author and a professor of journalism at Columbia, summarizes their appeal: ”Like Bonnie and Clyde, many of them were attractive personally. They were into youth, exuberance, sex, drugs. They wanted action.”

That exuberance has been captured by the filmmakers. Mr. Green and Mr. Siegel have made ”Underground” a film of passions, showing what a turbulent period the late 1960’s were and slyly contrasting the peace-and-love vibe with events of the time. The S.D.S. began as a nonviolent movement that adopted armed struggle only to make a statement, the movie explains. But the Weathermen felt that S.D.S. wasn’t going far enough. As a former Weatherman, Ms. Jaffe, puts it, her voice still girlishly soft: ”We felt that doing nothing in a period of repressive violence was itself a form of violence. That’s really the part I think is hardest for people to understand.”

Mr. Green and Mr. Siegel convey the volatility of the time through news film. The documentary is packed with some of the most powerful images of violence of the period: a bound Vietnamese man being shot in the head at point-blank range, the bloody bed of the Black Panther Fred Hampton after he was shot to death by the authorities. The movie captures a movement in motion, with its contradictions of good intentions and narcissism — a revolt so accelerated and noisy, there was no time for reflection during its heyday.

But ”Underground” doesn’t let its subjects off the hook, despite an apparent sympathy for their politics. Reflecting on the impact of their behavior — the group took responsibility for bombing two dozen public buildings, including the Pentagon — these former radicals now reconsider their approach. Mr. Rudd, who now teaches math at a community college, smiles painfully when he talks about telling his students what he did in the 60’s. ”My students look at me as if I were from another planet,” he says.

Mr. Flanagan draws a connection between the Weathermen’s actions and the Oklahoma City bombing. The men now see as much wrong as right in their previous lives.

The women are still full of hope. By the end Ms. Jaffe admits that she’d do it again if she could be smarter about it. That mixture of optimism and toughness was what started the Weathermen, and it still has a place in Ms. Jaffe’s heart. It’s also the spirit of ”The Weather Underground.”