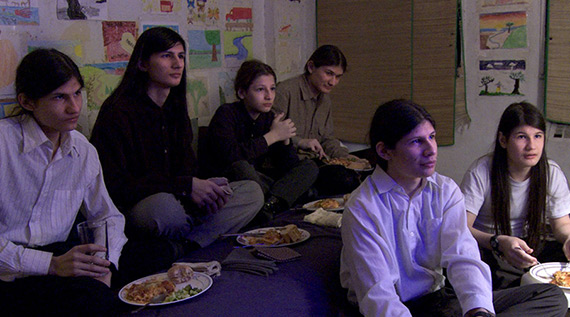 This screening is SOLD-OUT. Tickets may be released to the rush line at 7:50pm.

The six Angulo brothers have spent their entire lives locked away from society in an apartment on the Lower East Side of Manhattan. Nicknamed “The Wolfpack,” they’re all exceedingly bright, are homeschooled, have no acquaintances outside their family and have practically never left their home. All they know of the outside world is gleaned from the films they watch obsessively and recreate meticulously, using elaborate homemade props and costumes. For years this has served as a productive creative outlet and a way to stave off loneliness – but after one of the brothers escapes the apartment (wearing a Michael Meyers mask for protection), the power dynamics in the house are transformed, and all the boys begin to dream of venturing out. Armed with unprecedented access into the subjects’ world and vast archive of home movies, first-time director Crystal Moselle crafts a fascinating portrait of an extraordinary family, capturing the thrill of the Wolfpack’s discoveries without skirting the darker questions of abuse and confinement that weigh upon all of them. THE WOLFPACK charts an extraordinary coming of age story and becomes a true example of the power of movies to transform and save lives.