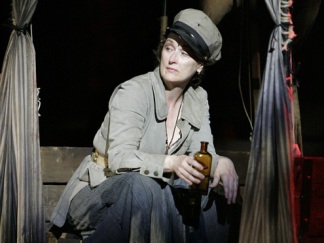 A NYT Critics’ Pick, below are excerpts from Manohla Dargis’ review:

In his inspired, inspiring essayistic documentary “Theater of War,” the filmmaker John Walter jumps from art to history and politics and back again, from the theater of the streets to the theater of the stage, without pause. That makes the movie, which follows a Public Theater production in Central Park of Bertolt Brecht’s epic play “Mother Courage and Her Children,” tough to summarize, which is part of its appeal. Because while the movie is about a particular staging of “Mother Courage,” it is also about the war in Iraq, theater (and bicycle riding) as social protest, the necessity and futility of art, and the agonizing human failing that Mother Courage gives voice to in “The Song of the Great Capitulation.”

“Theater of War” is also, as a matter of course, about Brecht. He wrote the landmark “Mother Courage” in the late ’30s while in exile in Scandinavia, having left Germany in 1933 soon after Hitler was appointed chancellor. Set against the Thirty Years’ War and opening in 1624, the play pivots on Mother Courage, a war profiteer who sells goods to soldiers from her canteen wagon. (“Boots they will march in until they die!”) In time she loses her three children to the war, yet she holds on to her wagon, which she drags behind her like a coffer (or coffin). Though it is often described as a war play, the theater critic and Brecht translator Eric Bentley has countered that it is actually a business play.

The business of mounting a play is also part of what interests Mr. Walter, who directed the highly recommended 2002 documentary “How to Draw a Bunny,” about Ray Johnson, the collagist and pioneer of mail art. Money makes the world go around, including at the Public Theater, where Mr. Walter spends time with a costumer and a prop man, two workers whose labor (which doesn’t appear especially alienated) was instrumental to the 2006 production of “Mother Courage” under his lens. Receiving even more face time is Tony Kushner, who did the new translation for this production, and Meryl Streep, who starred in the title role and agreed to let Mr. Walter shoot the rehearsals as she groped around for — and then ferociously seized — her character.

Having divided his film into thematic chapters (“In Search of Bertolt Brecht”), Mr. Walter works through his subjects (art, activism, war, theater) associatively, circling around them. Images of Mr. Kushner riding his bicycle somehow lead, logically and seamlessly, to Iraq war protesters on their bicycles. Although the movie includes a fair share of talking heads (including that of the novelist Jay Cantor, who delivers a mini-course on Marxism threaded through the movie), as a filmmaker Mr. Walter always remembers to show and not just tell. Among the highlights: some wonderful home-movie fragments of Brecht with his young family and choice clips from his fascinating (sometimes funny) testimony before the House Un-American Activities Committee, which the theater director Carl Weber laughingly terms a “brilliant performance.”