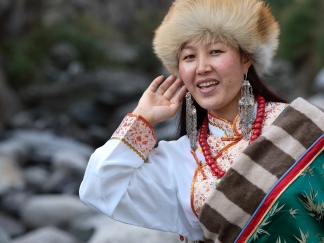 Winner of a Special Jury Prize at the 2009 Sundance Film Festival, TIBET IN SONG goes beyond familiar sloganeering about Tibet to explore the country’s cultural repression from the inside. Director Ngawang Choephel will be on hand for a Q&A that’s not to be missed.

From the Variety review:

“In 1995, Ngawang Choephel returned to his native Tibet to document the country’s fast-disappearing folk-singing tradition. Instead, he was accused of being a spy and sentenced to 18 years in prison by the Chinese, inspiring international demand for his release. Despite the personal hardship he suffered, Choephel puts the local musicians and their endangered traditions first. But the helmer’s own experience strongly amplifies “Tibet in Song’s” political subtext, revealing a form of cultural Darwinism in which Chinese control threatens to extinguish centuries of cultural heritage….the docu’s very existence is something of a miracle.”