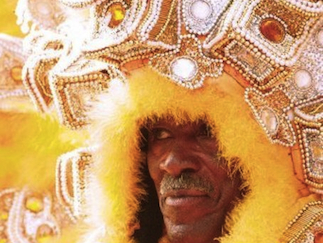 “Tootie represented a kind of soulfulness in the community, and a certain type of style, and everybody loved him.” &”8211; Wynton Marsalis

TOOTIE’S LAST SUIT explores the complex relationships, rituals, history, and music of New Orleans’ vibrant Mardi Gras Indian culture while telling the story of Allison “Tootie” Montana, former Chief of Yellow Pocahontas Hunters. Celebrated throughout the New Orleans as “the prettiest,” for the beauty and inventiveness of his elaborately beaded Mardi Gras costumes, Tootie Montana masked for 52 years, longer than any other Mardi Gras Indian. Through the example of his own achievement, he came to be revered for turning Mardi Gras Indians away from gang-style violence toward artistic accomplishment and competition.

When Tootie retired in 1997 from the painstaking labor of creating a new Mardi Gras suit each year, he conferred the title of Chief on his son Darryl Montana. Pressured by his fans, and possessed of an unflagging imagination and artistic will to create, Tootie committed himself to making a Mardi Gras comeback in 2004. As he completes his last Mardi Gras Indian suit, and decides to parade alone, lifelong conflicts erupt between Tootie and Darryl. Though deeply personal, this father-son rivalry speaks to the issue of how traditional cultures are preserved, and how they are continuously re-interpreted. TOOTIE’S LAST SUIT is not just about Tootie’s passing on the baton, but also about the difficulty of letting it go, as well as the distinct possibility that the baton will be dropped. While it is Tootie Montana’s voice that predominates, much of his story is told and seen from the points-of-view of his son Darryl, the various chiefs who are both his rivals and admirers, and others connected to the culture, including Wynton Marsalis and Dr. John.

In the aftermath of Katrina, TOOTIE’S LAST SUIT bears witness to the Mardi Gras Indians who, in picking up the threads of their torn lives and tradition, are the spiritual healers of New Orleans.