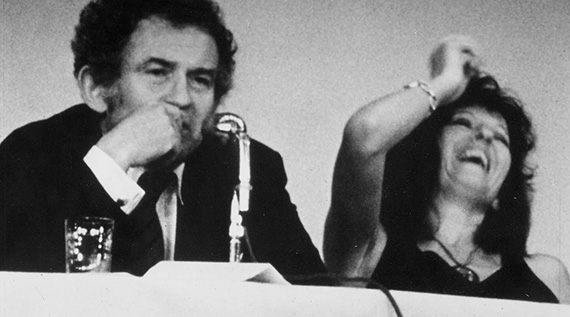 “Frequently funny, it’s a pleasure to watch. Mailer backpedals and obfuscates like a madman, but what finally makes Town Bloody Hall—so compelling and unsettling—is the impression that such serious, spirited debate is a thing of the past.”
-— Mark Holcomb, The Village Voice

On the evening of April 30, 1971, a standing room only audience of local literati and feminists packed New York City’s Town Hall to watch Norman Mailer, who had just written “The Prisoner of Sex,” grapple with a panel of passionate feminists. The subject was Women’s Liberation, an issue on which Mailer seemed like the devil’s own advocate.

There to test him was a fearsome panel of feminist representatives, among them journalist and lesbian spokeswoman Jill Johnston; legendary literary critic Diana Trilling; president of The National Organization of Women (NOW), Jacqueline Ceballos; and possibly his toughest match, the glamorous and razor-tongued author of The Female Eunuch, Germaine Greer.

The event, produced by Shirley Broughton and her ongoing Theater For Ideas, turned into true theater for the celebrity-stuffed audience, who vigorously offered opinions and roared their approval and disdain throughout the raucous affair. It remained the most stimulating and entertaining action to date in the continuing comedy/drama of the war between the sexes and is reverently referred to by writers on the subject.