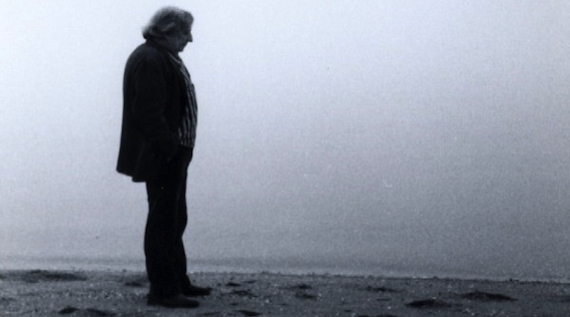 Alan Berliner's new film FIRST COUSIN ONCE REMOVED is among those docs scheduled for Stranger Than Fiction's Winter Season.

Stranger Than Fiction this week announced the lineup for its Winter Season, which is scheduled to start Jan. 8 with a screening of director Roman Paska’s REHEARSAL FOR A SICILIAN TRAGEDY, a look at the artistic traditions of Sicily as guided by actor John Turturro. Both Paska and Turturro will be on hand for an audience Q&A following the screening; you can find more information about the screening and purchase a ticket here. Other films in the Winter Season include a number of festival darlings, among them Alan Berliner’s FIRST COUSIN ONCE REMOVED; Amy Nicholson’s ZIPPER: CONEY ISLAND’S LAST WILD RIDE; and Terence Nance’s AN OVERSIMPLIFICATION OF HER BEAUTY. You can see a nice overview of the Winter Season films here. Consider taking advantage of the STF Season Pass, which gets you a ticket to all eight screenings, along with free popcorn and a free DVD from Docurama.

Writers are taking advantage of the few remaining weeks left in the calendar year to turn out “best of” lists for 2012, along with pieces that take a look back at the year or at what 2013 has in store for us. The POV staff rounded up their choices for the top 12 documentary stories of the year, with an April tax court decision that deemed documentary filmmaker a business practice, and not a hobby, topping the list. At the Documentary Channel blog, writer Christopher Campbell tallied the best music docs of the year, while writers at alt-weekly The Chicago Reader listed the year’s best political docs.

Jennifer Merin of the About.com documentary page had a list of picks for the year’s best docs broken into subcategories, such as “pure entertainment,” while the writers at the British DocGeeks blog also listed their favorite docs of 2012. Tom Roston did the same for the POV blog. The hive-mind of the Indiewire Critic’s Poll named THIS IS NOT A FILM the year’s best documentary. And back at the DocGeeks site Rebecca Brand provided a list of five female directors to keep an eye out for in 2013. Maria Goodavage of the Independent Lens blog also took a look back at the year the show had.

The fictional narrative film ZERO DARK THIRTY by director Karthryn Bigelow, about the hunt for Osama bin Laden, made some waves in the documentary world this week. Stranger Than Fiction Artistic Director Thom Powers recaps some of the conversation below:

The new film ZERO DARK THIRTY enjoyed a warm reception from film critics, then a backlash from other journalists as charted in The Atlantic Wire. “We believe the film is grossly inaccurate and misleading in its suggestion that torture resulted in information that led to the location of Usama bin Laden,” wrote three members of the Senate Intelligence Committee as reported by Steven Zeitchik in the Los Angeles Times. Other dissenters include Glenn Greenwald and Peter Maass. The film’s screenwriter Mark Boal defended the film on the grounds that “it’s a movie, not a documentary.”

That argument didn’t fare well with Jane Mayer, author of The Dark Side: The Inside Story of How the War on Terror Turned into a War on American Ideals, who wrote in The New Yorker: “In the very first minutes of ZERO DARK THIRTY, before its narrative begins to unspool, the audience is told that the story it is about to see is ‘based on first-hand accounts of actual events.’ If there is an expectation of accuracy, it is set up by the filmmakers themselves. It seems they want it both ways: they want the thrill that comes from revealing what happened behind the scenes as history was being made and the creative license of fiction, which frees them from the responsibility to stick to the truth.”

On Saturday, the debate was joined by Alex Gibney who investigated the torture practices of the United States in his Oscar-winning documentary TAXI TO THE DARK SIDE. In a 3,500-word essay published on Huffington Post, Gibney wrote: “Boal and Bigelow, by all accounts, are frustrated that the discussion of their film has been bogged down in a political debate that they want no part of. I would say, in response, that the debate is not political at all. The subject of torture is one of the great moral issues of our time. Boal and Bigelow shouldn’t run from it. They should engage it.”

For those curious to see a documentary rather than a fictionalized take on these events, you needn’t wait long. MANHUNT: THE SEARCH FOR OSAMA BIN LADEN, directed by Greg Barker and based on the book by Peter Bergen, will premiere at the Sundance Film Festival in January. According to the catalogue note written by Sundance programmer David Courier, the film “creates a riveting tale of espionage and the moral choices of war.”

The Sundance Institute on Dec. 17 named the 25 documentary feature-length projects that will receive grants from their Documentary Film Program and Fund (DFP), with films receiving money for development, production, post-production and audience engagement. Kevin Ritchie at Realscreen reported on the details of the grants and projects, which includes a new film by Frederick Wiseman titled AT BERKELEY.

The winners of the Alfred I. duPont-Columbia Awards for excellence in broadcast and digital news were named this week, with Alison Klayman’s AI WEI WEI: NEVER SORRY; Steve James’ THE INTERRUPTERS; and Lee Hirsch’s BULLY among those receiving the award. At Realscreen, Barry Walsh had some details on the awards, while Tim Horsburgh of Kartemquin Films wrote a post on what THE INTERRUPTERS winning the film meant for the production house.

In his weekly Docutopia post, Anthony Kaufman considered whether documentaries were more effective than fictionalized narrative films in dealing with traumatic events, such as the recent Sandy Hook school shooting. And at POV, Tom Roston’s thoughts also turned to documentaries that address tragedy, such as Michael Moore’s BOWLING FOR COLUMBINE.

At Realscreen, Adam Benzine reported on production company Participant Media’s purchase of The Documentary Channel. Benzine reported that Participant also planned to purchase Halogen TV and combine the two into a channel targeted at television viewers aged 18-34. Nellie Andreeva at Deadline also had details of the purchases.

Writing for The New York Times, Tanzina Vega reported on some of the new approaches used by doc filmmakers to find funding for their projects.

At the New York Times, Michael Cieply took a look at the new Alex Gibney film WE STEAL SECRETS, which focuses on WikiLeaks figures Pfc. Bradley Manning and Julian Assange and is set to premiere at Sundance next month, along with a slew of other films based on the WikiLeaks episode.

At the Documentary Channel blog, Christopher Campbell reported on the five films added to the U.S. National Film Registry this week, as did Barry Walsh at Realscreen.

The Cinema Eye Honors this week named the D.A. Pennebaker and Chris Hegedus film THE WAR ROOM, which follows the 1992 campaign of presidential candidate Bill Clinton as the recipient of its Legacy Award. Christopher Campbell had additional details on the award at the Documentary Channel blog.

Back at the POV blog, filmmaker Robin Hessman penned a post about the recent Moscow premiere of her film MY PERESTROIKA, which, along with a handful of other films, is currently available for free streaming at POV’s website.

At the What (Not) to Doc blog, Basil Tsiokos was getting caught up on some festival recaps, writing a post on docs that screened at the New York Film Festival. And on Indiewire, Tsiokos explained the thinking behind some of the end times films he recently programmed for streaming service Hulu.

News broke this week that Martin Scorcese would helm a new documentary about former President Bill Clinton for HBO. Yvonne Villarreal had the details for the Los Angeles Times, while Dave Itzkoff covered the news for the New York Times’ Arts Beat blog.

In a pair of pieces, The Los Angeles Times’ Janet Kinosian this week wrote up the films that made the Oscar shortlist, and then rounded up five perspectives of documentary filmmakers on how the ideas behind the Occupy Wall Street movement had made their way into the wider collective consciousness.

Speaking of the Oscar shortlist, Pete Hammond of Deadline highlighted some films that the Academy may have overlooked, despite recent rule changes intended to benefit films produced with theatrical distribution in mind.

Writing for the DocGeeks blog, Alexandra Zeevalkink reported on the seven films announced as part of the program for the 2013 Berlin International Film Festival, which includes the Su Freidrich film GUT RENOVATION.

At Filmmaker Magazine, Kevin Canfield interviewed WEST OF MEMPHIS director Amy Berg about the path that lead Berg to make a film about the West Memphis Three.

At PCmag.com, writer David Murphy wrote an interesting piece on the distribution model adopted by the filmmakers behind the documentary MINECRAFT: THE STORY OF MOJANG, who decided to upload their film to BitTorrent tracker The Pirate Bay, despite plans to sell the film both as a DRM-free stream and as a physical disc.

Michael Murie’s latest installment of This Week in Cameras for Filmmaker Magazine focused on the high frame rate footage adopted by Peter Jackson for the new film THE HOBBIT. It would be interesting to see if documentary filmmakers see the potential of high frame rates making footage “too realistic” to be a problem for non-fiction storytelling.

At Wired Magazine, Tom Cheshire had an interesting piece on the documentary project CLOUDS, which uses a hacked Microsoft Kinect motion sensor to capture data that is then visualized to approximate a traditional talking head shot. (This is kind of hard to explain; it’s worth checking out the article’s pictures for a better understanding of the project.)

Filmmaker Magazine’s Jon Reiss had an interesting piece on the IFP’s recent PMD (producer of marketing and distribution) lab, which focused on the changing approach to identifying and then reaching a target audience that filmmakers need to consider in a digital world.

And finally, Sandra Gaudenzi issued an entreaty for people to participate in the creation of a new Web Documentary Manifesto.

That does it for this week. Please keep sending your tips and recommendations for the Memo to this e-mail, or via Twitter to @GuerrillaFace. Thanks, and have a great holiday and a great week everyone!