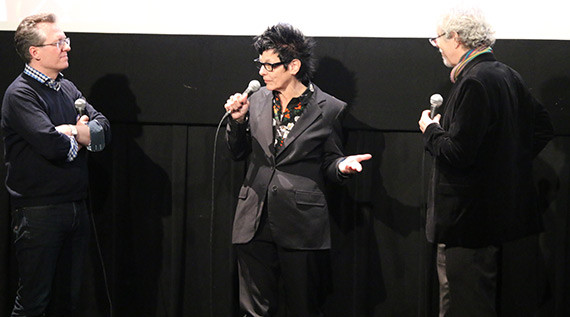 In front of a full house, the Stranger Than Fiction spring season kicked off with Craig Lowy’s energizing OXD: One Extraordinary Day. The 2015 DOC NYC alum follows choreographer Elizabeth Streb and her Extreme Action Company as they prepare to catapult, bungee jump, and suspend themselves off famous London landmarks in celebration of the 2012 Summer Olympics. The troupe’s exhilarating performances explore what it means to make a clear, swift choice to act; to jump down the rabbit hole of fear with playful irreverence, unparalleled poise, an intrepid spirit, and the pluck to reemerge and do it all over again.

Through dance, pop action, and stunts that somersault the constraints of gravity, the Streb Extreme Action Company is a troupe of artists redefining the limits of possibility. OXD opens with try-outs for the troupe’s upcoming London event, which will include seven extraordinary and massively challenging performances. To audition, men and women who possess a supreme physical, emotional, and mental grit jump higher and higher off multi-tiered scaffolding. They land face-flat on a mat that has just the right amount of yield to absorb the shock of the fall and facilitate a rapid transition from belly to feet.  Present alongside Lowy for the post-film Q&A, Streb said that the concept is about “removing unnecessary preparations and recoveries, you want them gone; I don’t see any reason with action to preempt what you’re going to see next–it’s a way to see the human body in motion that you might not see otherwise.”

During the Q&A, Lowy told the audience, “Usually when you go to make a documentary nothing goes right, everything goes wrong, and suspiciously everything was too easy.”  While OXD makes it crystal clear that Streb training is not easy, once the performers make it to London, in the moments preceding the Millennium Bridge bungee jump, they lift off as effortlessly as if they were birds. While abseiling down City Hall, their instincts and footing are sharp and primal. As they traverse the spokes of the London Eye, they disarm the crowds who are caught marveling from below. The superhero-red bodies spinning and dancing at dizzying heights look, strangely enough, like they’re at home.

OXD captures the terrific battle of fear that lives within each performer. Even when there is fear, they jump. Over, and over, and over again they have practiced, learned, and executed actions that interrupt their fears. They demonstrate in OXD that despite their fears, they have developed a muscle memory dictating that their movements be incisive and without hesitation. Thus while it’s out of the ordinary to, for instance, jump flat on one’s face countless times, a Streb dancer’s movement is the antithesis of recklessness; it’s the highest art of freedom and spontaneity.

During the Q&A, STF creator and host Thom Powers asked Streb to speak about the act of creating something that only exists for a day. Streb said, “It’s impractical at first glance, but I think that I’ve learned so much from that one day and perhaps suspected that action should be something that people accidentally happen upon. Because we weren’t allowed to say when, where or what [the performance in London would be] due to health and safety rules in London during that time, you could see in the morning, there was nobody there. We’re performance artists, we want everyone in the world there! And what now has plagued me since then is that that’s the most ultimate presentation of action, the situation where action has potentially the most power to affect people–I think action at its best is a magical discovery but the longevity of it, if its right, if you hit your target right, no one will ever forget that moment when they glanced up and saw those dancers on the London eye. And they’ll always look at the London eye and say where are those dancers?”

Photography by Joseph Schroeder, who has managed the production of highly acclaimed educational and informational programming for networks such as PBS, A&E and National Geographic for over a decade. Currently the production supervisor of The Independent Production Fund. Follow him on Twitter and see more of his work on his website. 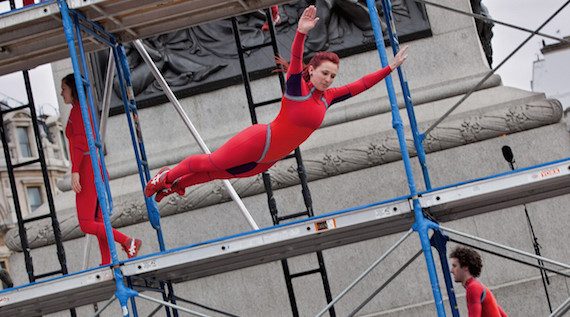