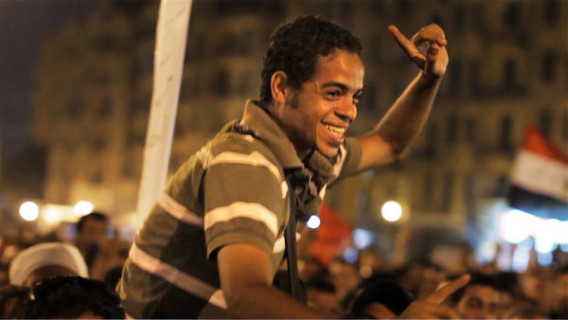 Jehane Noujaim's film THE SQUARE made waves this year after Netflix nabbed digital rights for it.

The film world remains roiled by digital technologies that are still transforming the way documentaries are made, funded, marketed and viewed. What follows is an interview with Thom Powers, programmer for documentaries at the Toronto International Film Festival (TIFF) and the Stranger Than Fiction series, as well as artistic director of the DOC NYC festival, about the changes being wrought by digital, and the state of documentaries in 2013. Click here for the 2012 State of Docs.

Rahul Chadha: Do you think that 2013 saw significant changes in the overall state of docs?

Thom Powers: One way to answer that question is to think about how docs are reaching audiences. Looking back on the 2013 Toronto International Film Festival, I think of three notable docs that sold to relative newcomers. One is THE SQUARE that sold to Netflix. Along with its acquisition of THE SHORT GAME, Netflix has announced itself as a staking more ground in the doc space. They hired Adam Del Deo, a filmmaker who collaborated with Jim Stern on docs like EVERY LITTLE STEP and SO GOES THE NATION and is now looking at new titles to acquire. Netflix has made a big impression with what they’ve done in fiction television with House of Cards. They’re talking about doing the same for documentary.

END_OF_DOCUMENT_TOKEN_TO_BE_REPLACED

Programmers occupy a unique space in the film landscape, serving as a force that both curates and supports films, while often remaining unknown to all but the most impassioned cinephiles. Given that STF Artistic Director Thom Powers has made programming documentary film his life’s work, I thought it would be interesting to get his views on the state of documentary in the year 2012. What follows is a conversation we had on December 30, 2012.

[This Q&A was edited for clarity]

Rahul Chadha: I guess the first question is, if you had to sum up the year in documentary, how would you do it?

Thom Powers: One of the things that impressed me about 2012 was the sizable output of really intellectually meaty films. And a lot of these films had to do with the Middle East—and I’m thinking of THE LAW IN THESE PARTS, or THE GATEKEEPERS. And outside of the Middle East I would point to THE CENTRAL PARK FIVE—films that had a really strong engagement with history and showed a depth of reporting and probing interviews that really added to our understanding of these different issues.