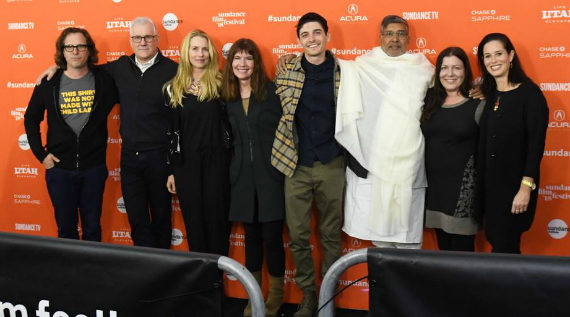 After having raised $54,000 last year via Kickstarter for his new live documentary on the Kronos Quartet, Sam Green and his collaborating subjects performed A THOUSAND THOUGHTS for the first time at Sundance, garnering overflowing praise from Sam Adams at Slate, “Watching it was the most joyous experience you could have at Sundance this year, but it was more like a shared secret than a breakout hit.” At Filmmaker Magazine, filmmaker Kirsten Johnson discussed her involvement in the project, while Kim Adelman at IndieWire listed Green’s new short doc JULIUS CAESAR WAS BURIED IN A PET CEMETERY among the best shorts at Sundance this year.

A couple week’s back Anthony Kaufman expressed concern about the doc market at Sundance this year, and though there weren’t any staggeringly high buys like this year, doc sales did indeed take place, with Magnolia picking up KUSAMA-INFINITY and Neon buying THREE IDENTICAL STRANGERS, according to Selina Chignall, while Daniele Alcinii reported on the current state of the doc distribution landscape, both at Realscreen. Mike Fleming Jr. broke the news at Deadline that Steve James’ Sundance debuted doc series AMERICA TO ME, which Daniel Fienberg of The Hollywood Reporter said was “well on its way to being one of the year’s best,” was licensed for a hefty $5 million by Starz for worldwide distribution rights. James appeared on the Film Comment Podcast to discuss the series.

Looking toward the future, Variety’s Dave McNary reports that “the International Documentary Association has announced 13 grants to films worth a combined $205,000 and aimed at furthering inclusion and diversity.” Filmmakers to receive funds include Lyric R. Cabral, Joe Brewster & Michèle Stephenson, Jason DaSilva, and Ramona S. Diaz, among others. At Deadline, Dino-Ray Ramos broke the news that Todd Haynes has signed on to direct his first documentary project, THE VELVET UNDERGROUND. In announcing the project, Haynes said, “I couldn’t be more excited to be embarking on this project with the folks at Universal Music Group, a documentary—my first, in fact—about one of the most radical and influential rock bands in the world of music: The Velvet Underground.” And at the same time, another Hollywood giant announced his first foray into documentary filmmaking – Peter Jackson announced he is working on a World War I documentary for BBC, reported Selina Chignall of Realscreen.

After a Sundance dominated week, I leave you with a grab bag of worthy extra reads in Judy Berman‘s list of non-depressing docs to currently stream on Netflix for The New York Times, RAT FILM director Theo Anthony writing about the reality TV series THE PROFIT for The Talkhouse, J. Hoberman on the Maysles classic SALESMAN also in The Times, and Tatiana Craine reviewing the new NYT Critics’ Pick basketball doc SHOT IN THE DARK for The Village Voice. As always, if you have any tips or recommendations for the Memo, please contact me via email here, or on Twitter, @Rectangular_Eye.