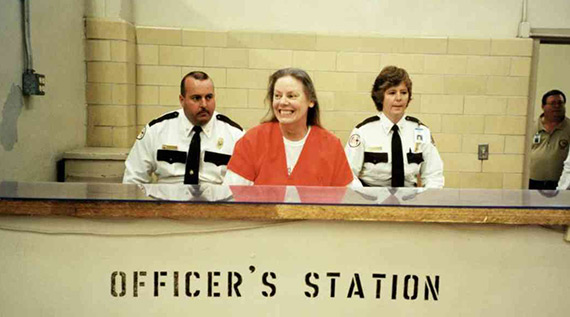 Twenty two years ago Nick Broomfield made a film “Aileen Wuornos: The Selling of a Serial Killer”.  Aileen’s lawyer, her born again Christian mother and the Florida state police had all been involved in trying to sell her story, the story of America’s first female serial killer, to the highest bidder. Aileen herself, who was convicted of murdering seven men, ironically emerged as the most honest person.

Aileen and Nick Broomfield kept in touch writing occasionally and then in 2002 he was served with a subpoena to appear at Aileen’s final state appeal before execution. Extracts of “Aileen Wuornos: The Selling of a Serial Killer” were shown in court, showing her lawyer puffing on a big joint, before giving her legal advice in prison. Many of her childhood friends were also called as witnesses.

Then unexpectedly Aileen suddenly announced she had killed the seven men in cold blood, not in self defense as she had pled previously and she wanted to die immediately. Jeb Bush, the State’s governor, welcomed Aileen’s decision and announced his intention to reunite Aileen with her maker as soon as possible. ln a subsequent interview Aileen admits in an unguarded moment when she thinks the camera is turned off that she did kill in self defense but that she can no longer stand being on death row (12 years) and has to die.

The film portrays Aileen’s childhood in Troy Michigan as one of unbelievable abuse and violence, which continued with her years on the road as a hitch hiking prostitute and ultimately culminated in the murders. ln her last interview, which Aileen asked Nick Broomfield to do, she said she believed her mind was being controlled by radio waves and that she would be taken away by angels on a space ship. The film provides an insight into the mind of a deeply paranoid yet sympathetic person who lost her mind and killed seven people.

lt is a powerful statement against the death penalty and raises disturbing questions about executing the mentally insane.

Aileen Wuomos was executed in the state of Florida on October 9th 2002.

DIRECTOR’S STATEMENT:
This is the most personal and most disturbing film l have made. l knew Aileen over the course of 12 years, and the barbaric nature of her death had a profound effect on me, and months of nightmares. lt was one film l didn’t choose to make, l came to it as a witness and ended up attending an execution.

The violence of taking a life remains the same whether it is legally sanctioned or not. lt introduces murder into our vocabulary of behavior.