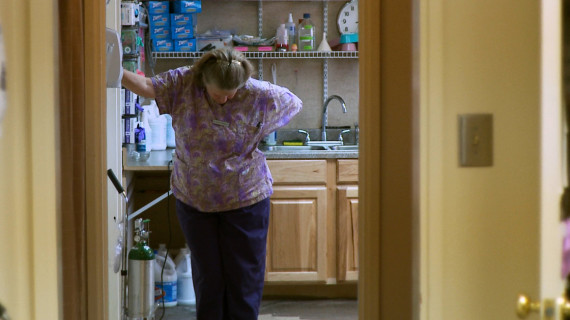 The Grierson Trust announced the final nominations for its 2013 awards this week. Kelly Anderson covered the announcement for Realscreen, while Alexandra Zeevalkink did the same at DocGeeks.

An IFP Week panel on whether docs should speak truth to power proved to be feisty, according to Bryce J. Renninger’s post on Indiewire. Colleague Paula Bern covered the panel on fact/fiction hybrid work, and wrote another piece covering the panel on navigating festivals.

Just a friendly reminder that the deadline to apply for the Karen Schmeer Film Editing Fellowship is September 30. Fellows are given mentors and passes to film festivals and screenings, along with a cash award.

At Realscreen, Adam Benzine provided a comprehensive recap of documentary news that came out of the Toronto International Film Festival (TIFF). Benzine also interviewed Alan Zweig on his TIFF win for best Canadian feature prize for his film WHEN JEWS WERE FUNNY. Daniel Walber reviewed WHEN JEWS WERE FUNNY for Nonfics.com. Indiewire presented its critic’s poll on docs that screened at TIFF, finding MANAKAMANA from Stephanie Spray and Pacho Velez taking the top spot. And Ion Cinema’s Jordan M. Smith reviewed A SPELL TO WARD OFF THE DARKNESS from directors Ben Russell and Ben Rivers.

This week Anthony Kaufman’s Docutopia piece at the SundanceNOW blog focused on the use of voiceover in documentaries. In a separate post a Indiewire’s Reel Politik feature, Kaufman took a look at the new film INFORMANT from director Jamie Meltzer. Jim Newell of The Baffler also penned a piece on INFORMANT subject Brandon Darby.

California Newsreel established a page dedicated to the work and legacy of filmmaker Marlon Riggs which is worth checking out here.

In a post at the PBS Mediashift blog, Abigail Maravalli looked at three ways filmmakers had made webisodes work for documentary.

At Nonfics.com, Daniel Walber overviewed some recent documentary work coming out of China.

The International Documentary Association announced that it had hired Ken Jacobsen as its new education director. Thomas White penned a post at the IDA’s website.

Hal Siegel of Storycode lent an interview with documentarians Kel O’Neill and Eline Jongsma to the POV blog. POV also put out a call to documentary filmmakers, asking them to fill out an equipment survey about the tools they use when producing work. And Fernanda Rossi focused on the film JUSTICE FOR MY SISTER in her Film Anatomy column.

Alison Willmore of Indiewire reported that CNN had inked a deal with Tom Hanks to produce a 10-part series on the 60s for the news channel, while Kevin Ritchie also had details at Realscreen.

Basil Tsiokos shared a doc overview for the Haifa International Film Festival at his What (Not) to Doc blog, and also gave the Urbanworld Film Festival the same treatment.

At Nonfics.com, Robert Greene shined a spotlight on BELOW SEA LEVEL, a 2008 work from filmmaker Gianfranco Rosi.

At Realscreen, Adam Benzine reported that this year’s International Documentary Film Festival Amsterdam (IDFA) would feature a retrospective on Niek Koppen, and would focus on World War I docs.

Josh Dickeny of The Wrap reported that The Weinstein Company was turning it’s Shane Salermo-helmed doc SALINGER into a biopic, and would also be adding new material to the doc. Adam Benzine had similar coverage at Realscreen, as did Michael Ciepley of the Times. Pamela McClintock of The Hollywood Reporter said the changes were due to complaints about the film.

In distro news, Mike Fleming Jr. reported that SUPERMENSCH: THE LEGEND OF SHEP GORDON had been picked up for North American distribution by RADiUS-TWC.

Christopher Campbell, writing for Nonfics.com, reported that GMO OMG from director Jeremy Seifert had done well at the box office, pulling more than $15k on one screen over one weekend.

That’s it for this week. Please send any tips or recommendations for the Memo via e-mail here, or through Twitter at @GuerrillaFace. Thanks and have a great week!