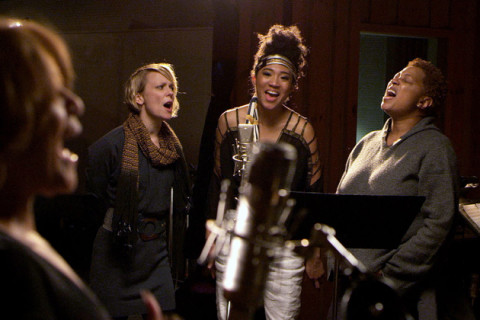 There were already a number of distro deals coming out of Utah. Realscreen’s Barry Walsh reported on CNN Films and Lionsgate’s acquisition of DINOSAUR 13. Realscreen colleague Adam Benzine had the news that Ro*co Films had nabbed international rights for four films prior to the start of the festival: MARMATO from Marc Grieco; E-TEAM from Kate Chevigny and Ross Kaufman; THE INTERNET’S OWN BOY: THE STORY OF AARON SWARTZ from Brian Knappenberger; and WHITEY: THE UNITED STATES OF AMERICA V. JAMES J. BULGER from Joe Berlinger. And Kevin Ritchie of Realscreen reported that Sundance’s own Artist Services also announced that it would premiere 11 films online in a partnership with Cinedigm.

At Nonfics.com, Christopher Campbell reviewed CONCERNING VIOLENCE from Goran Hugo Olsson, giving it four stars. Drew Taylor of Indiewire property The Playlist had a review of WHITEY: THE UNITED STATES OF AMERICA V. JAMES J. BULGER from Joe Berlinger. And back at Nonfics.com, Christopher Campbell reviewed THE OVERNIGHTERS, also giving it four stars.

Stranger Than Fiction also announced its lineup for the Winter Season, set to start on Tuesday, January 28. Films hitting the IFC Center this season include FINDING THE FUNK from Nelson George; LOU REED: ROCK AND ROLL HEART from Timothy Greenberg-Sanders; MONTEREY POP from D.A. Pennebaker; BROTHERS HYPNOTIC from Rueben Atlas; THE ROAD TO FAME from Hao Wu; A GREAT DAY IN HARLEM from Jean Bach; and a special screening of THE CENTRAL PARK FIVE from directors Ken Burns, Sarah Burns and David McMahon. Tickets are available for individual shows or season passes can be bought for $99 for 9 films.

Louis Chunovic of Realscreen reported that video hosting service Vimeo had announced the launch of a $500,000 program intended to help distribute films that had seen some success via crowdfunding platforms. Paula Bernstein of Indiewire also covered the announcement.

The MacArthur Foundation this week announced that 18 documentary projects would receive grants funds totaling $2 million. Manori Ravindran had details on the grant recipients at Realscreen.

The Tribeca Film Institute Doc Fund also named its grantees this week. Tambay A. Obenson noted some of the fund’s recipients in a piece at Indiewire’s Shadow and Act blog, while Kelly Anderson of Realscreen also covered the news.

In an impressive piece by any standard, Jason Guerrasio presented a comprehensive oral history of HOOP DREAMS at The Dissolve.

The Directors Guild of America named the nominations for its documentary awards this week, with Gregg Kilday of The Hollywood Reporter and Christopher Campbell of Nonfics.com with details.

Writing for Variety, Dave McNary reported that the Writers Guild of America had handed director Alex Gibney an award for his script for the film WE STEAL SECRETS: THE STORY OF WIKILEAKS. Kevin Ritchie of Realscreen also had the news.

Adam Schartoff of Filmwax fame turned out a few videos over the past few weeks as segments of the BK Live show. In the first he speaks on Filmwax Radio and the Sundance Film Festival. In the second he talks to PUSSY RIOT: A PUNK PRAYER director Maxim Pozdorovkin.

In distro news unrelated to Sundance, Oscilloscope Laboratories acquired worldwide rights to the Wayne Wang documentary SOUL OF A BANQUET, with Manori Ravidran of Realscreen on the news.

The news desk at MoviesWorld.com reported that documentary filmmaker Roberto Guerra had passed away. Peru-born Guerra had most recently worked with Kathy Brew on the film DESIGN IS ONE: LELLA & MASSIMO VIGNELLI.

Lisa Hasko rounded up a number of grant opportunities available to documentary filmmakers at the IDA website.

Christopher Campbell dutifully rounded up the documentary films of note hitting theaters this week over at Nonfics.com. In a separate post at the site, he shared his home picks for the week.

The Museum of Modern Art this week announced the lineup for its annual Documentary Fortnight program.

In a post at the POV blog, Heather McIntosh considered how the launch of PBS America had introduced Britain to a host of U.S. public television programming.

Back at Indiewire, Paula Bernstein spoke with MAIDENTRIP director Jillian Schlesinger on hiring a female crew to shoot her film. And in a Filmwax podcast, Adam Schartoff interviewed Schlesinger about her film.

Robert Greene rejuvenated his Shots From the Canon series at Nonfics.com by profiling LOS ANGELES PLAYS ITSELF from director Thom Andersen.

At National Geographic, BLACKFISH associate producer and co-writer Tim Zimmerman took stock of the ways that the film had affected the SeaWorld park.

That’s it for this week. Please remember to send any tips or recommendations for the Memo via e-mail here, or by Twitter to @GuerrillaFace. Thanks and have a great week all!