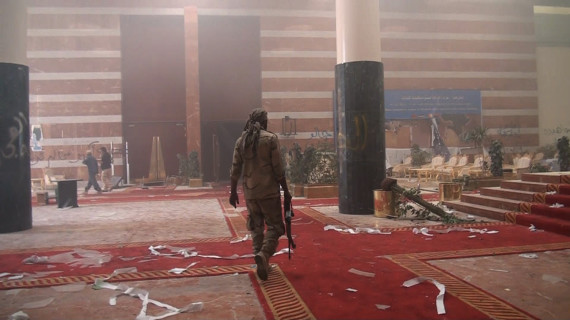 On Wednesday, November 5 at 8:00 p.m. STF presents a special screening of SUPERMENSCH, the film from director Mike Myers about Hollywood insider Shep Gordon. Following the screening Myers will be in attendance for a Q&A. For more information or to purchase tickets please go here.

Over at Filmmaker Magazine, Allan Tong interviewed Chris Hegedus and D.A. Pennebaker on THE WAR ROOM. And writing for the New York Times, Cara Buckley wrote on the efforts of the filmmakers to find a home for their archive of countercultural material.

At The Dissolve, Nathan Rabin took note of the fact that Claude Lanzmann’s highly regarded film SHOAH about the Holocaust was available online for the first time via the SundanceNow Doc Club.

The Cinema Eye Honors named their list of The Unforgettables, the year’s most notable doc subjects.

Writing for the POV blog, Heather McIntosh covered the short explanatory film series WE THE ECONOMY from a variety of film directors.

In a post at the Nieman Lab, Liam Andrew had a post on the convergence of journalism and documentary filmmaker in the digital sphere.

At WBUR.org, Erin Trahan wrote on an MIT Open Documentary Lab project that used a tree as it’s medium of choice.

Clifford Coonan of The Hollywood Reporter reported that Chinese documentarian Shen Yongping faced the threat of prison for working on a film about the Chinese constitution. Sui-Lee Wee also covered the development at Reuters.

In distro news, Manori Ravindran of Realscreen reported that Tribeca Film had picked up U.S. rights to the film I AM BIG BIRD. Ravindran also reported that CNN Film sand RADiUS had teamed up to acquire and fund an as yet untitled doc about sexual violence on college campuses from director Kirby Dick.

At The Hollywood Reporter, Alex Ritman reported that Sanaa Seif, who had worked as a shooter and editor on the film THE SQUARE, had been sentenced to a prison term of three years in Egypt for participating in protests. John Riti of Paste Magazine also covered the news.

Writing for The Guardian, Ben Child reported that actor/comedian Russell Brand and director Michael Winterbottom were working on a documentary about the economy.

Steve Pond of The Wrap published a list of the feature-length docs that qualified for Oscar nominations for the year.

Back at Nonfics.com, Christopher Campbell shared a list of some of the films available for viewing on home platforms this week.

At Indiewire, Freja Dam wrote about documentaries shaped by the dangerous circumstances their filmmakers were surrounded by during production.

In a post at Ion Cinema, Jordan M. Smith shared a rundown of the top doc fests taking place this fall.

At Filmmaker Magazine, Scott Macaulay wrote on THE SCHOOLS PROJECT, a series of short docs about the closing of Chicago public schools.

Writing for Indiewire, Zack Sharf shared some highlights from a video Q&A with THE OVERNIGHTERS director Jesse Moss about gaining access to his subjects.

Marlow Stern talked to Debra Granik about her new project STRAY DOG at The Daily Beast, while Karen Kemmerle interviewed the director for the Tribeca Institute website.

This week the Integrated Media Arts MFA program at Hunter College is hosting Codes & Modes, a free conference on the character of documentary culture from November 7-9 in New York City. You can find a schedule of events here.

At the International Documentary Association (IDA) website, Thomas White spoke with Ross Kauffman and Katy Chevigny about their film E-TEAM. Also at the website, Morgan Neville recalled his experience watching the film WHEN WE WERE KINGS. And Laura Almo interviewed filmmaker Laura Poitras about her latest film CITIZENFOUR.

Finally, at his What (Not) to Doc blog, Basil Tsiokos profiled the docs screening at this year’s DocsDF: The International Film Festival of Mexico City, as well as at DOK Leipzig.

Please send all tips and recommendations for the Memo via email here, or via Twitter to @GuerrillaFace. Thanks and have a great week.