There was a packed crowd of documentary enthusiasts at last night’s STF tribute to George Stoney.  Among the audience were past collaborators of Stoney including Jim Brown and David Bagnall.  Also attending were filmmakers Bill Jersey, George Nierenberg, Jean Tsien, Paul Cronin, Judith Helfand, David Grubin, Tina DiFeliciantonio, Jennifer Fox, among others. 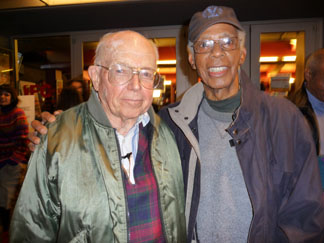 Attached are some photos from the reception:

3) L to R: Annie Howell from the film department at the New School and Judith Helfand (filmmaker BLUE VINYL, EVERYTHING’S COOL, among others)