Screening in conjunction with an exhibition now on display at the Museum of Jewish Heritage, FROM HOLLYWOOD TO NUREMBERG is an essential look at how the machinery of the war effort and the machinery of Hollywood filmmaking combined to provide documentation of the horrors of war.

After receiving a Fulbright grant to study the archival footage stored in the Library of Congress for his 2007 film, NUREMBERG: THE NAZIS FACING THEIR CRIMES, director, curator and film historian Christian Delage became inspired to portray the stories of the three filmmakers, and to highlight the professionalism and preparation of their outfits.

In the post-screening question and answer session, Delage described the goal of his film: “This is not only telling a story of war and liberation of camps, this is definitely a story of three filmmakers. They realized immediately what was at stake. They worked as professionals, they had precise instructions and took their roles very seriously.” He received the full cooperation from the families of Ford, Fuller and Stevens to get access to the notebooks and personal artifacts of each director and discovered a shared friendship, made possible through their efforts in very different positions during the war.

Ford was a commander in the US naval reserve and an Academy Award winning filmmaker who directed the special coverage unit under the auspices of the OSS or Office of Strategic Services. Ford’s unit produced one of the first pieces of WW II American documentary, THE BATTLE OF MIDWAY, which won the first Academy Award given for best documentary in 1942. While traveling in a naval convoy in the pacific, Ford captured the ferocity of one of the initial clashes in the pacific theater on a hand-held camera, and was injured by shrapnel during filming.

20th Century Fox studio chief Daryl Zanuck offered Ford the use studios in the evenings so Ford’s team could continue the work of processing, editing and scoring the footage that was being flown back from the front lines via London. Ford was joined by CITIZEN KANE cinematographer Greg Tolland and other industry veterans to produce newsreels shown to U.S. audiences in theaters. The trio of Stevens, Ford and Fuller worked in different theaters of operations during the war, with Stevens and Ford coming together to document the European offensive that began with D-Day in 1944. Fuller also participated in D-Day, but as an infantryman arriving in the third wave of the landings.

At the time, Stevens was an established director who headed the Army signal corps’ Special Coverage Unit. Stevens’ unit, known as “The Hollywood Irregulars” received its orders directly from general Eisenhower. Not assigned any official role to document the war, Sam Fuller was a screenwriter who joined up with the first infantry division and shot the liberation of the Falkenau concentration camp on a camera his mother sent him.

Citing the need to source the original material before it had been edited into “small pieces,” Delage has assembled a panorama of images and scenes from the battlefield unlike anything seen previously. For all the prominent names and production facilities involved in the coverage of the European and Pacific theaters, the most emotionally powerful scenes are some of those captured on Fuller’s silent hand held camera he carried loaded with him at all times. The audience is brought into connection with the prisoners as Fuller enters Falkenau, his camera held at eye level. Delage describes the footage and technique of Fuller capturing a shot of a lone soldier, “He was not prepared at all before, but what defines a filmmaker is knowing what is at stake, finding a good distance, and being a filmmaker is what Fuller wanted to be”.

Delivering the first footage of a concentration camp with his footage of the Nordhausen camp, Stevens’ unit captured such moments as a Lieutenant from Philadelphia delivering the first Jewish service held at Dachau, the still-filled railcars with emaciated bodies piled on top of each other destined for cremation, abandoned as their captors fled. Stevens’ lone sound unit captured the first official U.S. Army interviews of the prisoners at Dachau as the camp was being secured by allied forces. Ford would use Stevens’s footage to compile the documents presented to the court at the first Nuremberg trials that began on November 20, 1945. Footage of the local townspeople carrying and dressing the dead from Dachau and other camps to prepare them for a dignified burial is a striking example of what Delage refers to as “the right filming distance.” Delage described the importance of portraying how Ford, Fuller and Stevens did not allow themselves to be swayed by the ghastly events unfolding before their eyes: “The ethical point of view, the right point of view should be the same, whether you are filming Mount St. Michel or a concentration camp. You don’t have to adapt your ethical point of view depending on what you are filming, this must be a permanent spirit.”

Because of their positions within the OSS and SPECOU , Stevens and Ford were on hand to screen the footage captured by Stevens of the Dachau camp at Nuremberg. Because Fuller was an infantry soldier, he could not attend the trials but he would go on to recreate them in his 1959 film VERBOTEN!.

Conscious of the fact that the image can sometimes be seen as the weakest evidence in a trial, the orders handed down to the film units were successful in their goal of establishing an irrefutable body of evidence against the perpetrators. Delage noted the historic role of the documentary film evidence at Nuremberg. “After World War I, the trials used the term atrocities to describe the events, but after the screening of the films at the Nuremberg trial, another term begins to be used and that word is genocide,” he said.

.(JavaScript must be enabled to view this email address) is a film maker and musician living in Brooklyn.
Follow him on twitter @VanMeterDr 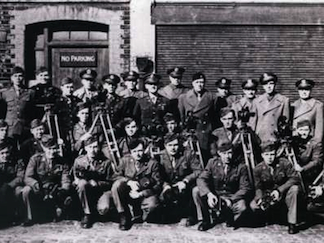