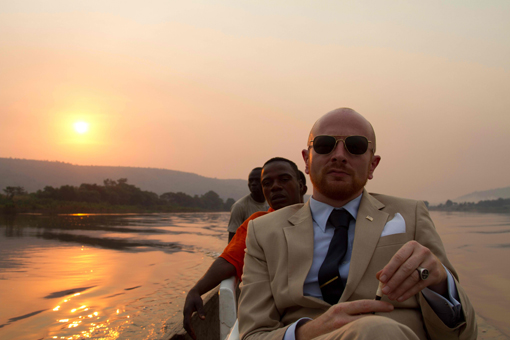 Danish director Mads Brugger’s new film THE AMBASSADOR, which reached theaters this week, stole much of the doc world’s spotlight the past few days, with many of the discussions surrounding the ethics of the filmmaker. The film follows Brugger’s efforts to essentially purchase a diplomatic title from an African country. At the Documentary Channel blog, Christopher Campbell interviewed Brugger about the active role he played in the film, as well as his previous documentary THE RED CHAPEL. Indiewire also had an exchange with the director, only to ask him to expound on his favorite scene from THE AMBASSADOR. Anthony Kaufman’s Docutopia blog questioned whether Brugger’s approach constituted an act of exploitation, as he flouts the traditional rules of journalism by employing hidden recording devices, among other techniques. Eric Kohn of Indiewire also wondered whether Brugger had crossed an ethical line in his approach. Reviews by both A.O. Scott in the New York Times and by Kenneth Turan in the Los Angeles Times touched on similar issues.

Efforts to help director John Maringouin raise funds for lung cancer surgery continue unabated. The IFC Center in Manhattan announced that it would host a benefit screening of Maringouin’s BIG RIVER MAN on Tuesday, September 4 to help defray the cost of his medical bills. UnionDocs in Brooklyn is also hosting a benefit screening on Saturday, September 22 of RUNNING STUMBLED.

This week saw the passing of documentary producer Brian Gerber, a board member of the International Documentary Association (IDA). Gerber’s doc production credits included the global warming film THE 11TH HOUR and THE DUNGEON MASTERS, about fans of the role-playing game Dungeons & Dragons. In a statement, the IDA noted Gerber’s role in relaunching the organization’s website and helping with the IDA Documentary Awards. Our condolences go to his friends and family.

Brent Lang of The Wrap had a great piece on the presence of female filmmakers, directors and DPs in the documentary world, according to a study by the Center for the Study of Women in Television and Film at San Diego State University. However, Lang noted that women directors had not found similar access to the fictional narrative world.

STF Artistic Director put pen to pad (or, more accurately, fingers to keyboard) this week in two posts, one to draw up a guide to documentary film sellers that will be at the Toronto International Film Festival, and another aimed at outlining some advice for filmmakers looking to get into the Twitter game. Check it out, there’s some really good advice in there.

Realscreen reported on PBS’s marking of Hispanic Heritage Month with a lineup of several docs exploring various facets of Latin American culture. Among those films on the docket are TALES OF MASKED MEN, about luchadores; UNFINISHED SPACES, about the efforts of architects to finish the construction of art institutions in Cuba; and DOC NYC alum LEMON, about poet and playwright Lemon Andersen.

Werner Herzog fans rejoice—the auteur has not just one, but two (somewhat) new limited documentary series slated for production. One, the “On Death Row,” picks up a second season of the show (Herzog already made one season that aired in the U.S. on the Investigation Discovery channel). Worldwide distro rights were recently picked up by ZDF Enterprises, which is reportedly in search of a buyer for the series. The other series, “Hate in America,” investigates the phenomenon of hate groups and associated violence in the U.S. Matt Goldberg at Collider.com also broke down the news.

Realscreen this week reported that Louie Psihoyos, director of the Oscar-winning film THE COVE, had launched a Kickstarter campaign for his follow-up film, THE HEIST. Psihoyos remained circumspect about sharing specific details of the new film in his Kickstarter video, but said it would depart from “the confines of a traditional documentary.” Given the strong activist flavor of THE COVE, it’ll be interesting to see what Psihoyos turns out.

The new Rolling Stones doc CROSSFIRE HURRICANE by Brett Morgen announced an air date of November 15 on HBO. The film is also expected to hit theaters in the UK and BBC2 sometime later in 2012.

POV this past week aired an encore presentation of the Kelly Duane de la Vega and Katie Galloway film BETTER THIS WORLD. In anticipation, the folks at POV spoke with the directors to get updates on the film’s subjects: Bradley Crowder, David McKay and Brandon Darby. Sean Holmquist also spoke with the pair for POV about writing the screenplay for the film. You can check out an STF Q&A with Galloway from last fall here.

Over at the Sundance Institute, Cristine Spines spoke with Rachel Grady and Heidi Ewing, the filmmakers behind the recent film DETROPIA, about their decision to launch a Kickstarter campaign and self-distribute the film following its screening at several festivals, including Sundance. Scott Feinberg of The Hollywood Reporter also spoke with the pair, who together constitute production house Loki Films, about their approach to filmmaking.

Submissions are now open for the 6th Annual Cinema Eye Honors. You can find a list of films eligible for the awards here, as well as information on how to submit a film for consideration.

Following the initial screening of her film STORIES WE TELL at the Venice Film Festival, filmmaker Sarah Polley penned a post for the National Film Board about how she came to make the documentary. I wish I could tell you more about it, but in the interest in preserving any surprises for myself, I’ve abstained from reading the piece. If you’re the kind of person who likes to open presents early, however, feel free to click and read away. Polley said she plans not to do any more press for the film during its run at festivals, so this may be the only chance you get to hear her speak about it in the near future.

Canon got the hearts of camera nerds everywhere pumping with news that it was releasing the C100, a scaled back version of its C300 camera, to be sold at a price of around $8,000. Filmmaker Magazine rounded up the opinions of some DPs on the camera, while the Notes on Video blog had its own reaction to the news. The camera appears to have been designed with one-person crews in mind and uses the same high-end CMOS sensor as the C300, but with a different native codec, and lacks an articulated on-camera monitor.

At Filmmaker Magazine, BLOOD BROTHER director Steve Hoover recounted how getting involved in the project led him to renew his passion for filmmaking after his roommate moved to India to care for a number of orphans there.

Back at Filmmaker Magazine, Frontline director of broadcast Tim Mangini was interviewed by Michael Murie on the topics of producing and directing for the WGBH show. The interview was broken up into two sections, which can be viewed here (part 1) and here (part 2).

This week also saw the passing of Jacques Bensimon, the former commissioner of Canada’s National Film Board. The Moroccan-born Bensimon took on a number of roles during his time at the NFB, and received an Order of Canada for his contributions to the country’s culture.

Christopher Campbell shared with us a preview of the September offerings at the Documentary Channel, which includes AMERICAN TEACHER, THE TENTS, THE WITNESS: FROM THE BALCONY OF ROOM 306, and THE LAST RUN.

POV also announced a new partnership with the Bronx Documentary Center, which resulted in a pair of September screenings at the space: Bernardo Ruiz’s REPORTERO on September 15, and Yoni Brook’s BRONX PRINCESS on September 22. To paraphrase John “Hannibal” Smith, I love it when documentary institutions come together.

The IDA this week also had a recap of it’s latest Doc U, this one dealing with the ins and outs of recording change.

As always, Christopher Campbell has done due diligence in rounding up this week’s theatrical releases in two posts, which you can find here and here
.

Tips and recommendations for the Memo can be emailed .(JavaScript must be enabled to view this email address), or tweeted to @GuerrillaFace. Hope everyone has a lovely Labor Day holiday and a great week!