Rooted in the radicalism of the era, the Photo League was founded in 1936 for the purpose of recording trade union activities and political protests. But, as shown in Dan Allentuck and Nina Rosenblum’s ORDINARY MIRACLES: THE PHOTO LEAGUE’S NEW YORK, the group’s work eventually evolved into a wide-ranging documentation of life in New York City. The League also managed to play a fundamental role in establishing documentary photography practices in the U.S.; much of its work was done with an eye to cataloging political and social strife that was otherwise ignored. However, the League’s Marxist beginnings would eventually prove to be the reason for its demise—the group fell apart under the strident anticommunism of the Cold War era. Following the screening, Stranger Than Fiction Artistic Director Thom Powers spoke with Producer/Director Nina Rosenblum, Producer/Director/Writer Daniel Allentuck and Contributing Producer Mary Engel. Click “Read more” below for the Q&A.

Stranger Than Fiction: Nina, can you talk about the most difficult thing in telling the story so many years later, and curating this wonderful group of people and photographs?

Nina Rosenblum: The project was so difficult because we wanted to do it so well. As two daughters of a Photo League member, the hardest thing was trying to be as true as we could to the motivations and story of the League. I think I felt like it was my lucky day that we could be the documentary team to make the film about the people who started documentary.

STF: Daniel, in writing the script, what were the challenges in telling this expansive story with so many characters?

Daniel Allentuck: It often felt like there was 50 other people in the room, saying I was a photographer for 50 or 60 years. You’re only using two of my pictures, what’s the matter with you? It was a balance. They kept us honest. It was quite a juggling act keeping them all happy.

STF: Mary, your parents Morris Engel and Ruth Orkin were so critical to this era. As someone who is the gatekeeper of their legacy, what’s it like to keep that period alive for contemporary generations.

Mary Engel: It’s an incredible honor and a legacy, and that’s what I do everyday. I made it a career, and I’m incredibly privileged to do it. My mother died fairly young, at the age of 63, so to be able to have her work so well known 26 years later is incredible. The same thing for my father, it’s thrilling. And the Photo League was such an important thing, as you’ve seen from the screen. We grew up with it, and it’s like part of our family.

Audience: Was the 1999 reunion when you started to work on the film?

Rosenblum: Yes. Danny, Mary and I got support from Howard Greenberg. And we said this is the time to do it, to make sure we would have as many people as we could. And we were very lucky to be able to put it together then. We wanted to make sure to record as many of the people as we could, and we were glad we did at that time. Even though it took so many years to really finish it, we had that basic material, thank goodness.

Engel: George Gilbert, who you see in the film, had a sort of Photo League reunion going. But it started and stopped. But just to locate everybody and get them all together was a huge feat. It was so exciting when it all came to be.

Audience: Could you say a little more about the impact of the blacklist on the Photo League?

Allentuck: Well, for a photographer, it was devastating because many of these photographers were photojournalists and needed their passports to travel. Being associated with an organization accused of being communist was enough to end their careers. That’s one of the reasons that the photographers that we interviewed talked about a gradual falling away of members who, for one reason or another, couldn’t keep their careers viable after a certain point.

Rosenblum: And another thing is that photojournalism was coming in, so there were other avenues where people could work. Times were really changing. So I think it was a combination of those forces that led the Photo League to change at that time. People left, but they also had the ability to get work in the magazine marketplace.

STF: Nina, for people who are excited about this film and want to tell their friends, what are the future opportunities for people to see this film or order DVDs?

Rosenblum: Well, along with other screenings like this that we have planned, including a film festival in Naples, this film will be available very soon on iTunes. So this will be downloadable for rent or purchase within the next few weeks.

Engel: And also the show is traveling. The film will be somewhat of a component, and will be shown sometimes in conjunction with the exhibit.

Audience: Do you feel that photography today is representative of America today in the same way?

Rosenblum: Some is and some isn’t. It depends on the photographer. The Photo League was very true to that. I think it varies today, there are so many different perspectives and people photographing. There are some people that are following in the footsteps of the Photo League with their finger right on that pulse. And I think the Photo League informed so much of what happened, not just in photography, but in film.

Audience: I was so struck by the parallels between that time and this.

STF: As you were working on this, were you thinking about parallels between the time of this film and contemporary time?

Rosenblum: I think we absolutely were hit right in the face with that. As we were developing the film, we really saw that parallel, we were living that parallel. And we thought, okay, this is something the Photo League members did. They made us really understand what was happening in our own time. And what a gift that is, to be able to be given the tools to see more deeply so you can take action in your own time. That’s, I think, what the Photo League left for the next generation.

Audience: What became of Weegee?

Engel: Go to the International Center of Photography. There’s a big show up, I think until September. It’s an incredible story. He was a unique individual and I think everybody’s fascinated by that kind of life.

Audience: What has been it been like to juxtapose the film with the gallery showings at the Jewish Museum?

Engel: It’s incredible. We’ve been working on the film for so long. And their exhibit was approved in 2001. It takes a long time to do a movie, it takes a long time to do a show. And to have it up for five months, you don’t usually get a show for five months. And the press and response has been terrific. I think it’s just a great marriage of the arts to be able to look at the show, and then also learn about it through the film. It’s exactly what we wanted.

Rosenblum: It’s a legacy that also came through my mom, Naomi Rosenblum, who curated shows of the Photo League in Europe. This was a real team effort, and she kept us honest. She really made sure things were checked and rechecked. And a long list of exhibitions started in 2000 in Spain and Italy started to put the legacy of the Photo League on the map, and then it just grew and grew. We feel very fortunate that the timing just came out right. This was a great collaborative affair. 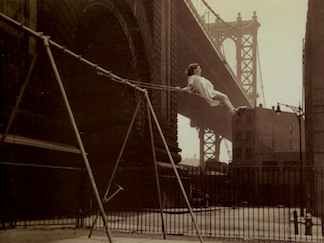