Stranger Than Fiction: The film starts out idyllic and it takes a turn in a different direction. How did that affect the filming?

Susan Kaplan: I never imagined that I would be filming for eight years, that was never my intention. We were finished with a version of it before the breakup. We were onlining it, and I get a call that the relationship ended. I just had to make the decision to go back out and film, I didn’t want to send a film that was not true into the world. With documentary films, you have to follow, you have to tell the whole story, at least as best you can. So I hung in for three years. They were so devastated that I wanted to end on a more hopeful note.

STF: Did they ever say please don’t film any more?

Kaplan: Just Steven did. Steven agreed to the filming after the breakup, but after a while said, you know what? I’m done, I don’t want to film anymore. So that’s why Steven is a little limited in terms of his growth. We had one really long interview with him and spent a couple of days with him, and then he said he was finished. A do have to say that each one of them had seen the film in a rough cut form, and given it their approval. I would never have sent the film out to the world without their approval.

STF: Did all of them come to the premiere? And what was that like?

Kaplan: We premiered in Toronto, and [the Toronto International Film Festival] sends out screeners to all the press. Samantha is from Toronto, and as you know from the film, her immediate family knew of the relationship, but no one else knew—none of her relatives, her parents friends. It got into the Toronto Film Festival, and our first screening was in a 1,000-seat cinema. It was early in the festival, and before we got there a review came out with their picture on the front page of the Toronto newspaper, with a great review but telling their whole story. I told Samantha that she really should show her family this movie. She said no, I really want them to see it in the theater with a thousand people. Her father was furious that he was outed in such a public way. He wasn’t going to come, in fact he was going to sue us for exposing something he felt was very private. I really was nervous about going to Toronto. Samantha didn’t know if her parents were going to show up, and they did. So much healing went on at that screening because at the end of the movie her parents applauded, and gave us all big hugs and said, I finally understand my daughter. He invited us to a big Indian brunch at his house, and it was very healing for everybody involved.

STF: Did the healing extend to Steven?

Kaplan: Yeah, Steven was there. He wasn’t at the brunch. It was very stressful to have all three of them up on the stage for the Q&A, but they handled themselves well.

Audience: What happened with Sam’s father?

STF: I’ve been in touch, but I haven’t seen the two guys in a few years. Apparently last summer Sam’s father was let out of prison. He’s a very complicated man, but charming in his way. He had cancer and was dying, and he moved in with Sam’s sister in Atlanta. Apparently the Cagnina family had a living funeral, and Sam’s father was part of the funeral. He has passed away, and Sam expressed to me that he had come to peace with his father, and was really happy that his father had gotten to see his kids.

Audience: How did you come to meet the subjects?

Kaplan: If you notice, Miami Beach plays a role in that. I knew Sam when I was a very little girl in elementary school, and Sam was a very charismatic young boy. We would do community theater together. All the kids would follow Sam around. Steven and I were in the same class together, so I knew Steven in high school, and then lost touch with them. I then met this women who was a diversity trainer at a conference in New York. She said, I’m going out with some friends tonight, would you like to join me? She said they were from Miami Beach and that Steven and Sam were married to this woman Samantha. I said, what? I had no idea Steven and Sam had gotten together, let alone that they had this woman in their lives. I said, absolutely, and spent an evening with them. They had been together for about eight years at the time, and I said to them, if you are ever to bring children into this relationship I would love to tell that story. Initially feeling that I would love to tell a story that challenged people’s idea of what family is, because it rocked my world when I met them.

Audience: How do you view the film now, and does criticism of the film affect your other projects?

Kaplan: I probably made a lot of mistakes in making this film, but you follow your intuition and your sense of story. It’s a collaborative effort, I work with really talented people who I would bounce ideas off all the time. Each film is very different, there are lessons to be learned, but they’re more global than specific. Sometimes they’re specific, like I would never shoot in film again. I shot the first part of the film in film, and then the last three years on video. When I watch the story, I get very emotional because it was eight years of my life, and I’m sure everyone who worked on the film probably has that feeling of taking this journey with them.

Audience: Did you or the subjects connect with other polyamorous people?

Kaplan: I naively did not know that these communities existed until the film came out, and then I was like, wow. This film was speaking to whole communities of people who were living in multiple-partner relationships. I wasn’t really focused on that part of it, it was more of an intimate story for me. I don’t even know if they knew about it.

Audience: What was going to happen if the subjects didn’t give their approval for the film?

Kaplan: We always said that if there was something that misrepresented them completely, where we were saying something that wasn’t truthful, that we would change it. Otherwise we wouldn’t change it. Perhaps now, if they were to watch this film—they’re not here tonight. They don’t want to take the journey. This is a period of their life that they don’t want to relive right now.

Kaplan: It’s very similar to what’s in the film. Sam and Samantha stayed together raising their two children. Steven was a very involved father, and has a very developed relationship with Sienna from what I understand. I think Sienna is 13 or 14 years old, Summit is 10. They’re pretty happy kids. I think just recently Sam and Samantha have moved on, they’re not living together. Sam, I’m almost certain has just recently moved out because he’s fallen in love and has been in a relationship for three years now. It was just time for Sam to move out, the kids are older now. It’s a complicated relationship for their children, therapy I’m sure is in their future. They came from a home of real love, and they were thriving happy kids.

Kaplan: When I see it now, I see it in the film. You almost have to see it a couple of times, it’s very subtle. I think we had questions along the way, we asked really tough questions. I think now how I refer to this film is as a coming of age story. Once all three of them made the decision to go into therapy and really find who they were, that’s when their relationship couldn’t hold up anymore. I wasn’t filming for the period where things really fell apart. It’s sort of there.

Audience: What was the timeline of shooting for the film?

Audience: The subjects seemed very natural, it never felt like they were putting on performances for the camera.

Kaplan: I spent a lot of time with them without cameras to know if I was getting the truth—as much as they were willing to share with me with cameras. I would say that’s really who they were back when they were in their relationship.

Kaplan: I’ve been working for four years on a documentary about the oldest nuclear power plant in the country called Oyster Creek, which is the same model as the Fukushima plant in Japan. I followed the relicensing, and a group of mothers and grandmothers fighting the relicensing and, ultimately, fighting to shut it down. I’m almost finished shooting and have started editing. I looked at those credits and was thinking, it takes an army to make a film. 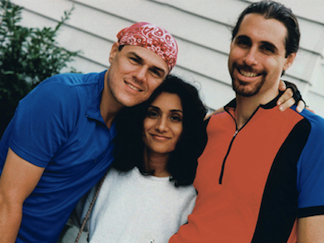 0 responses to “THREE OF HEARTS: A POSTMODERN FAMILY”